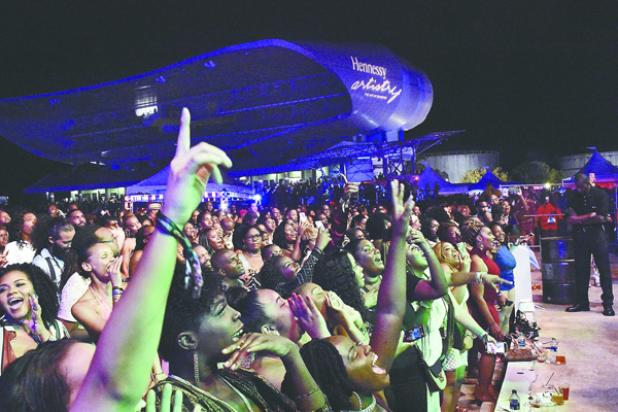 The ladies in the audience were captivated by Trey Songz's performance.

IT WAS a big celebration at the Kensington Oval as the FAS7STAR Hennessy Artistry celebrated its tenth anniversary on Saturday night.

The show was packed with hours of local, regional and international artists who gave phenomenal performances, however the loudest crowd response ironically came for someone who was not even on the line-up.

To say patrons were pleasantly surprised to learn that Mark “Buju Banton” Myrie will be performing in Barbados next April 6 at the Kensington Oval, would be an understatement. This unexpected news was met with a huge cheer from the audience. The hugely popular reggae artist, who was imprisoned back in 2011 is said will be released within a matter of days.

The Grammy-award singer was sentenced to ten years in a United States federal prison for his conviction for conspiracy to possess and distribute cocaine. In addition to the conspiracy charge, Banton was also found guilty of another drug trafficking offense and a gun charge.

Setting the stage for the long list of performances on Saturday night was local band Two Mile Hill with lead singer Mahalia, who thrilled the early crowd with their hits.

Another amazing vocalist was Romain Virgo, who was not fazed by the intermittent rainfall, thrilling the audience with Love Doctor, In This Together, Who Feels It, Leave People Business Alone and even took the audience back in time with When a Man Loves a Woman and Let’s Get It On.

Luciano also brought blessings to the stage with his uplifting set just around 10:30 pm. Another Jamaica superstar Shabba Ranks also took the audience back with Telephone Love, Mr. Loverman, Trailer Load of Girls and Twice My Age to name a few.

However, it was arguably ladies’ night at Kensington Oval as women of all ages could be seen practically drooling over American artist Trey “Trigga” Songz, who gave an amazing performance with impressive vocals when he hit the stage around 1:15 am. Performing hits such as Neighbours Know My Name, Can’t Help But Wait, and Can’t Be Friends, he hit all the right notes with his fans.

Bringing the curtain down was Popcaan, with numerous hits such as We Still A Win, Family and We Run the Streets.

The action continued yesterday evening at Pirate’s Cove with Hennessy Artistry on the Beach with the inimitable Spice headlining the acts with Cham & Rygin King and a local cast including Mole, Stiffy, Jus D, and Lil Rick. (JH)