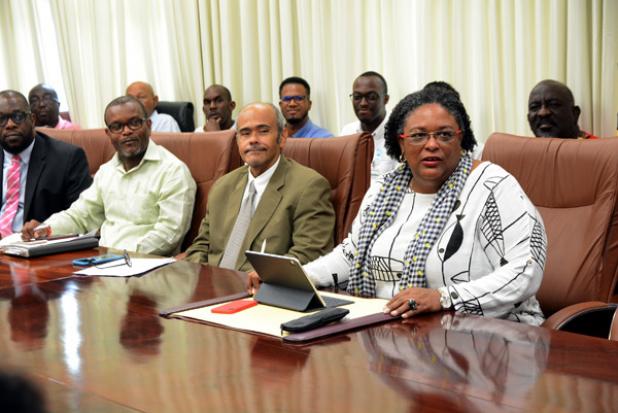 Cries about the impact of the $3.50 bus fare on the student population in this country have been heard, and as of yesterday schoolchildren will pay a reduced $2.50 to ride on public service vehicles (PSVs).

Prime Minister Mia Amor Mottley announced yesterday afternoon that with immediate effect the PSVs owners and operators have agreed that they will not charge the schoolchildren the additional dollar. She was speaking after a more than two-hour meeting with a wide cross section of the local transport sector, the Ministry of Transport, Works and Maintenance, the Transport Authority, the Transport Board and the Barbados Workers’ Union at Government Headquarters.

Mottley also revealed that commuters in general, if they purchase fares in bulk through the smart cards, will save a few more dollars as well. She said the volume discount fare will now be $3.

Meanwhile, referring to the intended new dispensation for the Transport Board, she maintained that Government will ensure that there is national approach to the delivery of public transport. PM Mottley said the intention is to use not only the buses currently owned by Government, but also vehicles operated in the private sector as route taxis and minibuses as well as BT and ZM licensed vehicles to provide transportation under the Transport Board brand. She said of the 270 buses to be operated under the brand, 120 are to be reserved for the Transport Board workers to own through private partnerships with others, or on their own.

“We have agreed that the Transport Board, the Transport Authority and the privately owned PSVs and the Ministry will work to be able to better refine the routes and to make sure that what we call the rebuttable presumption of the 270 buses needed, to more than adequately service the routes, is the objective to which we have to reach within the next two months or so,” she said.

The Prime Minister said discussions on this proposed system are nowhere near finish and they will be looking to work on the fine details such as which routes will be used, which operators will come on board and finalise a contract. In that regard, she said meetings will be held over the next few days so that from early as next week they can have more buses operating under the Transport Board brand.

Under this arrangement the privately owned PSVs will carry a Transport Board decal on the vehicles so persons can identify them, and those who currently ride free on the Transport Board buses including pensioners, school children and police officers will continue to do so on the vehicles carrying that decal. Mottley, admitting that the private operators are concerned about cash flow issues, gave the assurance that they will be reimbursed to transport those individuals. (JRT)