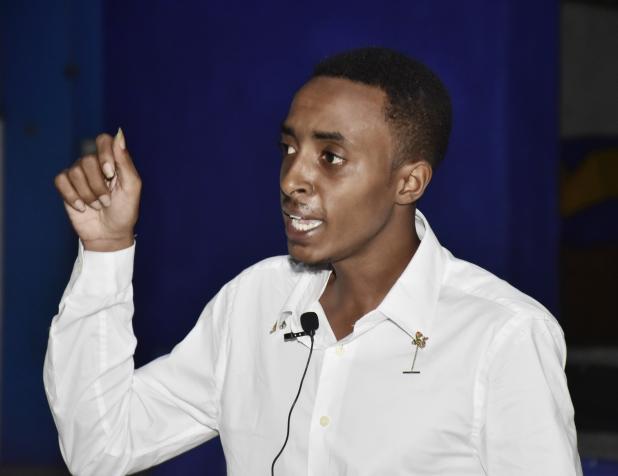 By following the five philosophical principles set out by former Prime Minister of Barbados, Errol Barrow, the leader of the Democratic Labour Party (DLP) could bring the dream of the late prime minister into reality.

These were the words of President of the Young Democrats, Kemar Stuart, in his feature address at the recently held DLP St. Michael Central Branch meeting at the George Street Auditorium. Stuart outlined the five principles crafted by Prime Minister Barrow into the constitution and he stated that he believes that if the newly-elected president of the party, would go back to these guidelines, the DLP would get back to the foundation it was built on and would again be a force for the people.

The young democrat president highlighted that the principle of economic activity and policy should not only benefit the privileged few, but all Barbadians alike. The principle also stated that the concept of economic enfranchisement would be utilised for the betterment of all society. Stuart referenced the fifth principle which states that the people of Barbados should participate in regional, hemispheric and world meetings in pursuit of world peace and economic justice.

He then quoted the late prime minister from a lecture, Development and Democracy", delivered to the Academy of Politics, in 1980, “It stands to reason, that any political party seeking to fulfill the expectations of the populus for equality, for jobs, for security and for the end to privilege, that the about to accomplish these means, should be in planned people centric manner and not in any whimsical and opportunistic and patronising manner.”

The young democrat passionately expressed his belief that the party was the one that gave Barbados and Barbadians real human development. He contended that if the two leaders battling for the presidency, current President Verla DePeiza and former DLP General Secretary and former candidate for Christ Church West George Pilgrim, could see and understand that the support of the people came first, it would be the first step in the right direction.

He further argued that the traditional leaders of the DLP, coupled with a growing middle class and an aspiring working class, had linked the fortunes of those people to the party which made it an attractive party to the voters. The young leader made the conclusion that this stance was once again necessary however stating that the election of the president must also be based on the future.

Stuart also made the point that it was not enough to speak locally but the leader of the DLP has to be able to continue to let the voice of the country and region be heard on an international scale. He referenced the appearances of Mia Amor Mottley, Prime Minister of Barbados on CNN and the BBC, saying that the next president of the party must also be one that can represent the needs and views of the people on that level and beyond.

“A leader of the Democratic Labour Party must step forward and fill a void. Articulate his or her position on regional integration and the furtherance of Caribbean unity,” stated Stuart. (AS)