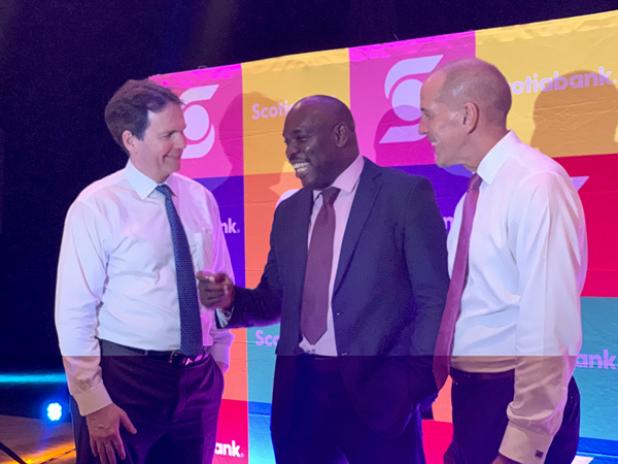 The Barbados dollar is stable.

This assurance was given by Minister in the Ministry of Finance, Ryan Straughn, as he addressed those gathered during the recent Scotiabank client cocktail event.

“There have been a number of projects over the last few years that were hindered… because of the uncertainty with respect to the stability of the Barbados dollar, which I can say to you this evening is secure and sound, based on the intervention that we have made,” he stated.

Straughn highlighted that as a result of the stability of the dollar, Government has committed to working as fast as they can to bring a number of these broad, stringent economic issues to the fore, in order to give the economy of Barbados an opportunity to grow.

“We anticipate that since we are in the process of working on the external debt…that would trigger into next year faster implementation of a number of projects, because the financial arrangement would be completely different – the fears with respect to devaluation would be unfounded and therefore there would be greater confidence,” he said.

“We are not yet out of the woods, but we are passing the right road signs, and we have said to the country earlier this year to stay the course in order to see these reforms through, but also such that the citizens of Barbados can see the benefits of the recovery, and we are committed."

The Minister noted that he was happy to hear that Scotiabank would maintain its presence in Barbados, as he believes that financial systems have a critical role to play with respect to mobilising resources and energising the growth of the economy.

He also assured that as the island is meeting each target and receiving signals of validation from the IMF, confidence is changing in the economy, to the point where they are seeing a fairly vibrant level of activity on the market.