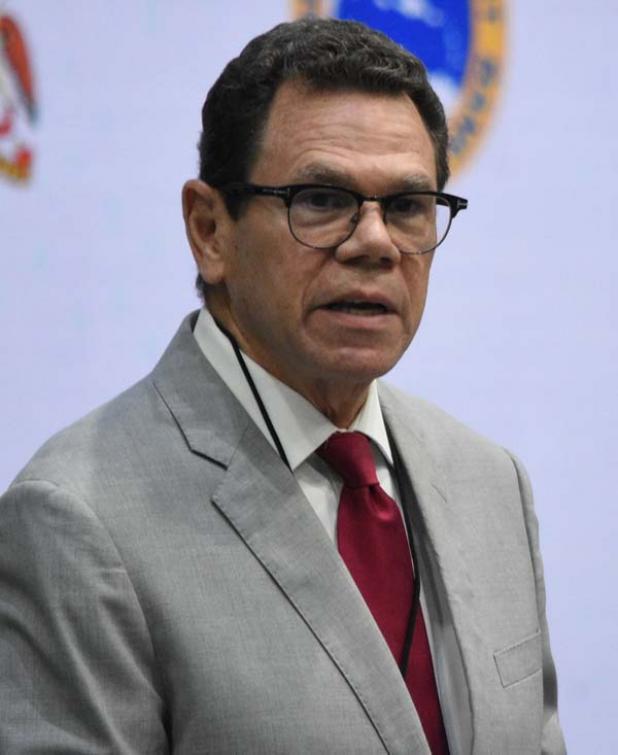 President of the Caribbean Development Bank, Dr. Warren Smith, during his address at the meeting. 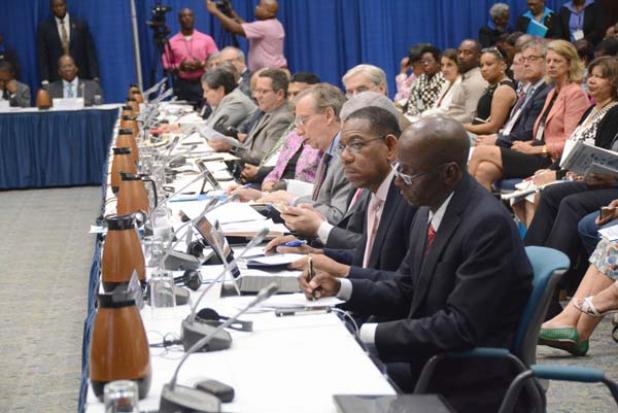 Some of those in attendance at the event.

President of the Caribbean Development Bank (CDB), Dr. Warren Smith, has drawn attention to the poor rates of implementation in the region, weak implementation capacity within countries and the tardiness of Caribbean people, as among the major issues that have to be addressed.

Speaking yesterday morning during the opening of the 2019 Caribbean Forum hosted by the International Monetary Fund (IMF), the Government of Barbados and the CDB at the Lloyd Erskine Sandiford Centre, Dr. Smith insisted that “moving the needle” on the answers to this region’s persistent challenges necessitates a “relentless commitment to implementation”, which he said must begin with a cultural shift that fosters increased accountability.

“We often joke about Caribbean people always being late, but time is money. So that tardiness undermines our capacity to deliver goods and services in a timely manner and undercuts our ability to compete based on low costs and/or high quality,” he told those gathered.

Smith went on to explain that lateness is only one manifestation of the region’s implementation problem. He made the point while noting that public sector investment programmes (PSIP) are underperforming, with several countries reporting implementation rates below 35 per cent and even as low as 20 per cent in some respects.

“We attribute to the public sector responsibility for creating an appropriate environment for the private sector to take leadership for economic growth and development. A PSIP that is performing effectively will stimulate private investment. The reverse is also true; an underperforming PSIP will undermine private sector confidence and its willingness to invest. Completion delays lead to postponement in the delivery of the intended development benefits as well as cost overages, which can compound an already burdensome public debt,” he added.

Addressing the audience which included the Prime Ministers of Barbados, St. Lucia and St. Kitts and Nevis, he referred to the World Bank’s Doing Business Indicators, which he said provide some of the critical factors that impact business decisions, including challenges with the approval of construction permits and access to electricity services.

“The speed with which these can take place provides a gauge of our region’s efficiency, vis-a-vis the best in class. We should not regard the analyses of this data simply as criticisms of our shortcomings in these areas. More importantly, we should grasp the opportunity for targeted redress of these very things that hamper competitiveness. Let us pull out for priority action those low-hanging fruit that can bring significant benefit with relatively minimal efforts,” he added.

The CDB president’s comments came as he admitted that implementation is of grave concern for the Bank itself as well, as he cited the “growing buckets of undisbursed balances” on their books, which he lamented have been the cause of much disquiet for him. Smith made the point while adamant that it is “cold comfort” that other development partners are facing similar challenges.

“Bear in mind that none of us are delivering on our development mandate if the funds intended for these countries remain in our coffers. Our goal should be for the intended beneficiaries to be able to access these resources for high priority development projects as quickly as possible,” the CDB head stated.

In that vein, he said the CDB is doing its part to tackle the implementation challenge from several fronts, including a major overhaul of their systems and business processes. He said at the heart of this effort is an aggressive information technology strategy, to assist the Bank in getting closer to its clients, improve the Bank’s responsiveness and generate greater efficiencies. He added too that they have adopted a new procurement framework which would increase operational flexibility and accelerate project implementation.

Additionally, he indicated that given the importance of training in addressing the implementation challenge, the Bank is completing a region-wide programme in public policy analysis and public cycle management training, targeted at enhancing skills in implementation and other areas in project management. With that in mind, he said over the past three years 2000 public officials have been trained and CDB is launching e-modules to extend the training to a greater number of persons.

“In addition to training, we are encouraging behaviour change, through for example, institutionalised delivery mechanisms or through project-by-project capacity and institutional building support,” he added. (JRT)