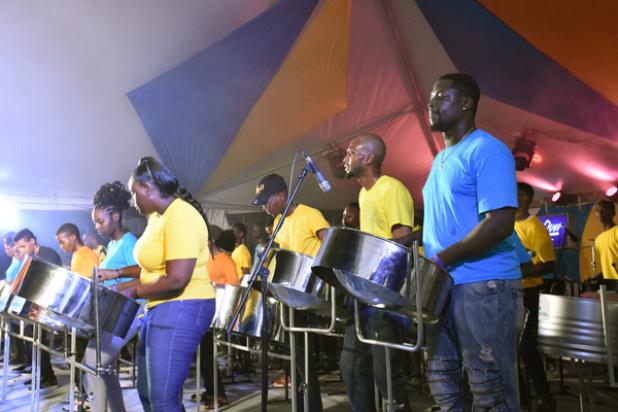 Members of the Combined Youth Steel Orchestra in action. 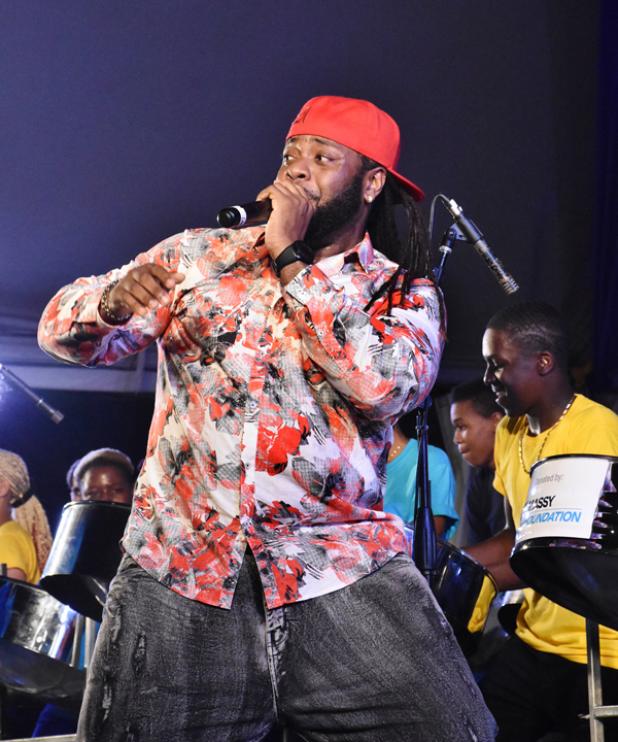 THE popular Barbadian saying “no rain can stop this jam” rang true for many pan-lovers who came out to Brandons Beach for the annual Pan Pun De Sand on Sunday evening.

That did not stop the hours of amazing performances on the two-stage set up with committed local and regional pannists who in spite of the rain, showed their incredible musical genius playing a variety of musical genres to the delight of the audience, many of whom could be seen rhythmically bobbing their umbrellas which created a sea of colour, while others jammed in the rain.

The talented Central Bank Young Professionals opened up the evening’s proceedings and they were followed by the band Panache out of Antigua who performed everything from Etta James’ “At Last” to Peter Ram’s “Crop Over Good Morning” and everything in between.

Undoubtedly one of the evening’s highlights was the debut performance of the 60-member Combined Youth Steel Orchestra, part of the National Cultural Foundation’s School’s pan project, who performed like seasoned professionals. Their set featured calypso royalty Cultural Ambassador Stedson “RPB” Wiltshire who rocked the audience with his popular “Boat Ride” and Michael “Mikey” Mercer who performed his popular “Feting Family”. Both appeared to experience some challenges with their microphones but the consummate professionals were still in fine form to the delight of the appreciative audience.

The Trinidadian Silver Stars Steel Orchestra also delivered an amazing performance featuring Professor Liam Teague who delivered a special tribute to Shadow and Ken “Professor” Philmore. As the night wore on and as the rain persisted, the rapidly thinning crowd would have missed an opportunity to witness the effortless expertise of maestro Len “Boogsie” Sharpe and Phase 2 with Cultural Ambassador Anthony “the Mighty Gabby” Carter.

Members of the audience were also treated to a showcase of fashion from leading department store Cave Shepherd on an elevated catwalk which extended into the crowd. The event was free to the public following the contribution of a “silent sponsor”. (JH)