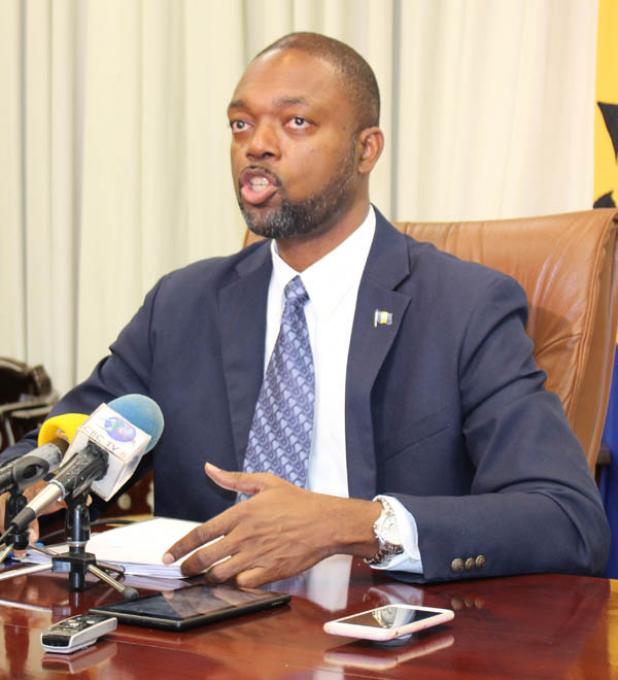 Minister of Labour and Social Partnership Relations and Member of Parliament for St. Peter, Colin Jordan, speaking to the media.

THE State Funeral for the late former Prime Minister of Barbados, Professor the Right Honourable Owen Arthur will be held next Friday, August 14.

It will occur from two in the afternoon. The service will be held at the St. Peter Parish Church with the interment following at Mount Pleasant Memorial Gardens in St. Peter.

Minister of Labour and Social Partnership Relations and Member of Parliament for St. Peter, Colin Jordan, revealed this as he spoke to the press on Friday at Government Headquarters.

Jordan, who has responsibility for co-ordinating the funeral arrangements, said as much as possible the service is in keeping with the expressed wishes of the late Prime Minister.

He shared that there will be condolence books at four locations for Barbadians to sign. From Monday, August 10, a book will be at Government Headquarters between the hours of 9 a.m. and 4 p.m. Also on this day, there will be a book at The University of the West Indies, Cave Hill Campus in the administration building from 9 a.m. until 4 p.m. Additionally, there will be a book in the Speightstown Library on Monday from 1 p.m. to 5 p.m. On Tuesday to Thursday, at the latter location, the book will be available from 10:30 a.m. until 5 p.m.

A virtual book is available online at https://www.owenarthurtributes.bb.

Jordan further said, “The body of former Prime Minister Arthur will lay in state on Wednesday, August 12 and Thursday, August 13. It will Lay in State between the hours of 10 a.m. and 4 p.m. During that time, the condolence books at the Parliament Buildings in Bridgetown will be available for signature.”

He also said “the casket will be closed” and “this is in keeping with the wishes of the former Prime Minister”.

He further said, “The casket will be transferred from the hearse to the gun carriage in Speightstown and proceed to the church.”

Students from the All Saints Primary School, Coleridge and Parry School, Harrison College, Elliott Belgrave Primary School, The University of the West Indies, Barbados Community College and the Samuel Jackman Prescod Institute of Technology will be in Speightstown along the route that the cortège will take. The Parish Ambassadors will also be involved along that same route.