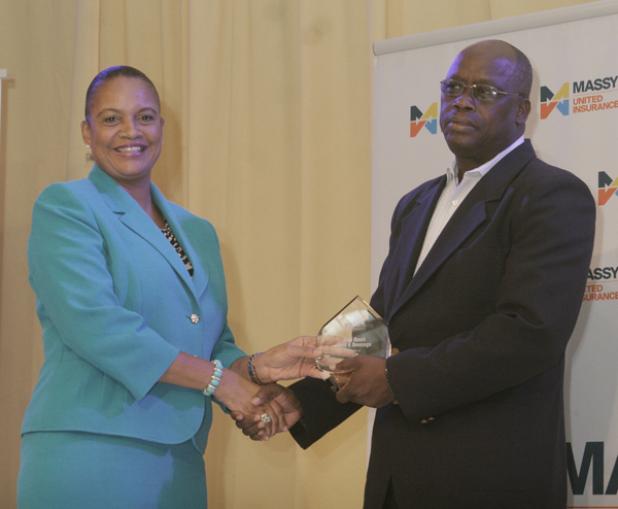 Representative of Massy United Insurance Limited, Sharon Alleyne-Elcock presenting the award for Best Booth Food & Beverage to the Barbados Agricultural Development and Marketing Corporation (BADMC). This was accepted by James Paul on their behalf.

Sun, 05/15/2016 - 12:59am
By:
Marsha Gittens
Renegade practices within the manufacturing sector in Barbados will not be tolerated.
Taking this stance on the issue is Executive Director of the Barbados Manufacturers’ Association (BMA), Bobbi McKay. Expressing concern about such, she said that the BMA will be seeking to bring it to an end.
“For example, just three days ago I had one of the manufacturers send me a long Whatsapp [message], which I will forward to the Minister [of Industry, International Business, Commerce and Small Business Development] in the morning, but one of his competitors, is actually importing products duty-free and changing the labels on them to say ‘Made in Barbados’. Very difficult to compete with but we are going to find a way to police it and we will find a way to stamp that one out.”
She continued, “Beyond the integrity issues that this raises, it presents other challenges and it makes the playfield very uneven. Authentic Barbadian manufacturers are then forced to compete with this and we all know that this is a major disadvantage. These are some of the things that we face every single day that we will continue to push on and eradicate the injustices as they arise.”
McKay’s comments came as she delivered the vote of thanks at Friday’s Massy United Insurance Limited BMEX Opening Ceremony. This was held at the Lloyd Erskine Sandiford Centre.
During Friday’s official opening of BMEX, awards were presented to the winners of the best booths on display. The Best Booth Food & Beverage was given to the Barbados Agricultural Development and Marketing Corporation (BADMC), the Best Booth Design & Furniture was awarded to The Furniture Boutique, Best Booth Construction was given to Supreme Signs and the Best Booth Services was awarded to Sagicor.
BMEX 2016 continues at the Lloyd Erskine Sandiford Centre until Monday.(MG)