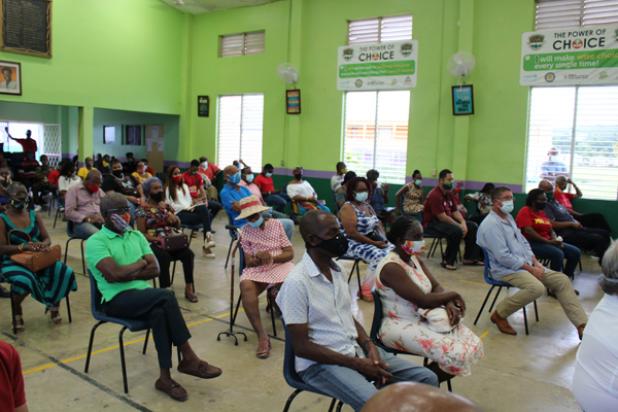 Barbados Labour Party’s (BLP) St. George North branch members say though he will be missed, they respect their parliamentary representative’s decision to be Barbados’ new High Commissioner to Canada.

Prime Minister, Mia Amor Mottley announced last Sunday that the St. George North Member of Parliament, Gline Clarke will be demitting office on September 30th to assume his new role in Ottawa. She was addressing the branch’s Annual General Meeting at the St. George Secondary School.

There will be a by-election in the constituency within 90 days of October 1st to elect a new Member of Parliament.

Speaking with The Barbados Advocate, Clarke’s cousin, Ashley “Bison” Downes said they “will never, ever get another representative for St. George North like Gline Clarke. He has done his best. He was helpful, especially to the old people, he wouldn’t let them down. I am going to miss him very much. I mean I shed a tear tonight knowing that he is going to leave but I do hope and wish him well and may God bless him in his endeavour.”

Meanwhile, Secretary of the BLP’s St. George North branch, Roger Coppin stated Clarke was “one of the best parliamentary representatives in the island of Barbados and we are going to miss him, no doubt about that but he made a decision between himself and family and we respect the decision. To find a representative to replace him I don’t think it is a very easy task because the precedent that he would have set is extremely high. We look forward to whoever that person is and we hope that the person will fit those big shoes that he wore.”

“It is a personal decision. He would have discussed it with his family and other members of the branch and the thing is this, we have to accept change. He has been a very good representative for 26 years but life goes on and if it is his personal decision to make then we will wish him well.” (MG)