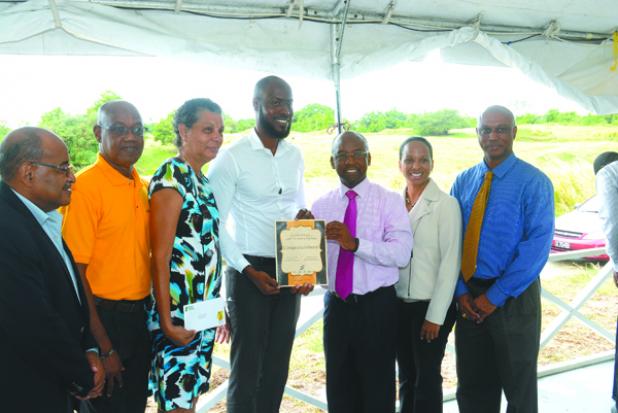 Thu, 01/19/2017 - 12:00am
IT APPEARS as though Crop Over 2016 has recorded a small deficit.
That is according to Minister of Culture, Stephen Lashley, who was speaking to the media yesterday, as he along with officials from the National Cultural Foundation and sponsors handed over the winning prize of a piece of land in Deans Town Terrace to Dr. Kevin Herbert, as part of the Lot 5 for 50 competition, which was held throughout the 2016 Crop Over season.
Saying that a more detailed press briefing on the performance of Crop Over 2016 and upcoming plans for 2017 will soon take place, Minister Lashley conceded that while there was growth in some areas, others have to be addressed.
“Certainly the semi-finals is an area we have to look at because that has proven to not be as profitable, but the performance has been good. We would like to be able to break even, but we made a slight deficit last year,” he explained.

“In Foreday morning there has been growth in that as well, and Grand Kadooment and Soca Royale performed credibly as well but overall I can say we are pleased with the performance. We can do with a bit more sponsorship dollars as well that is why the reality about managing Crop Over must be thorough, that we have wherever possible to ensure that the festival is managed and not incur a deficit.”

“Our sponsors look at managing their finances in a way that they are going to be much more scrupulous in terms of sponsorship dollars, we are forced to come up with innovative approaches to assure that we can get as many paying patrons as possible and ensure that Crop Over can at least break even or even make a surplus.”

He noted that the Lot 5 for 50 competition, which was held to coincide with the island’s 50th anniversary of independence was designed to ramp up gate receipts. “I thought it did, because we saw increased number across many of our events, but of course we are going to be looking to do more to ensure we bring about the result that we want.”

Chief Executive Officer of the NCF Cranston Browne assured that a meeting with stakeholders will take place next week to discuss changes in 2017.

“They are looking at ways to incorporate the public more into Crop Over so you will be hearing some exciting things about what we are doing, not only in terms of door prizes, but getting the public involved in some of the events.” He also pointed out that out of the 30 events held for Crop Over only five are paid events.

Minister Lashley while congratulating the winner on his win of approximately 5 000 square feet of land, stressed this would not have been possible without sponsors Barbados Public Workers’ Co-operative Credit Union and Capita Financial.

“This is truly an indication of the level of corporate interest and collaboration that is coming on board in terms of Crop over. We would like to encourage that because Crop Over is a national festival and Barbados needs to have every amount of support that we can get to ensure that Crop Over can grow as we have planned every year.” (JH)