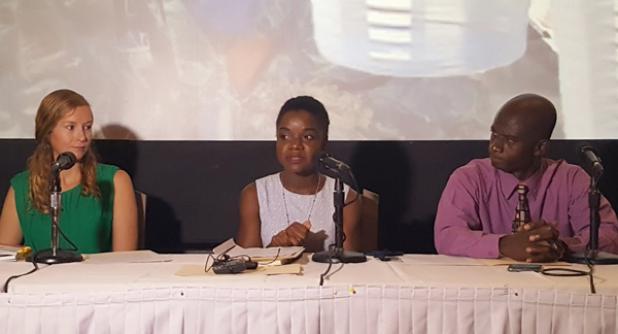 Carla Daniel (centre), Director of Public Awareness and Education at The Barbados Sea Turtle Project, UWI speaks about the destruction plastics are causing to marine life, as Nikola Simpson (left), marine biologist and Kammie Holder PRO at the Future Centre Trust, give her a listening ear. 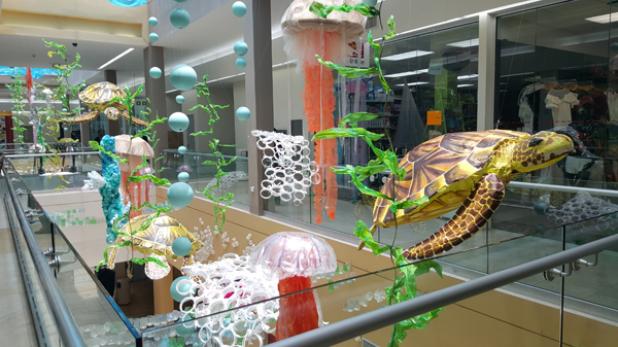 A view of the completed Skylight exhibit in Sheraton Mall, entitled ‘What’s In Our Ocean’.

The owners and operators of Sheraton Mall will be embarking on a year-long campaign, which will see a number of “green initiatives” launched, to raise greater awareness about the need to better protect the environment.

Owner and director of Sheraton Mall, Sharon Oran, acknowledged the above just yesterday, during a press conference held in the FLOW Olympus VIP section of the Mall.

Oran pointed first to the launch of the exhibit entitled “What’s In Our Ocean?”, an installation under the Mall’s skylight, located on the top floor of the Mall, which highlights the need to reduce single use plastic products such as straws, plastic bags and pep bottles, which are causing major damage to ocean life, especially sea turtles.

“As the owner and director of Sheraton Mall, I was compelled to do something to make a difference. Fortunately, I am surrounded by a team who shares my enthusiasm and has helped to develop a year-long Sheraton campaign, designed to bring awareness, education and change to Barbadians of all ages,” Oran remarked.

“Our project consists of not only an amazing art installation, created by (artist and interior designer) Dernell Browne, but several months of free promotional space that we are offering to organisations, committed to reducing single-use plastics and to bringing awareness to our marine life challenges,” Oran further noted.

Sharon Oran stressed that Sheraton Mall’s goal as the largest shopping mall in Barbados, is to lead the way in green initiatives.

“All the stores at Sheraton have been recycling cardboard boxes for over six years, thanks to the services of B’s recycling and now recently Project Recycle, but we want to do more,” she commented.

“Our dream is that one day people will no longer require plastic bags from stores, because consumers will be accustomed to bringing their own shopping bags,” Oran noted. As such, she noted that several of Sheraton’s largest retailers will be implementing a surcharge for plastic bags starting June 1, 2017, in an effort to reduce consumer’s dependence on plastic bags.

Sheraton will also be implementing Green Zones, where patrons can help to recycle plastic and glass bottles as well as aluminium cans, as part of the greening initiatives.