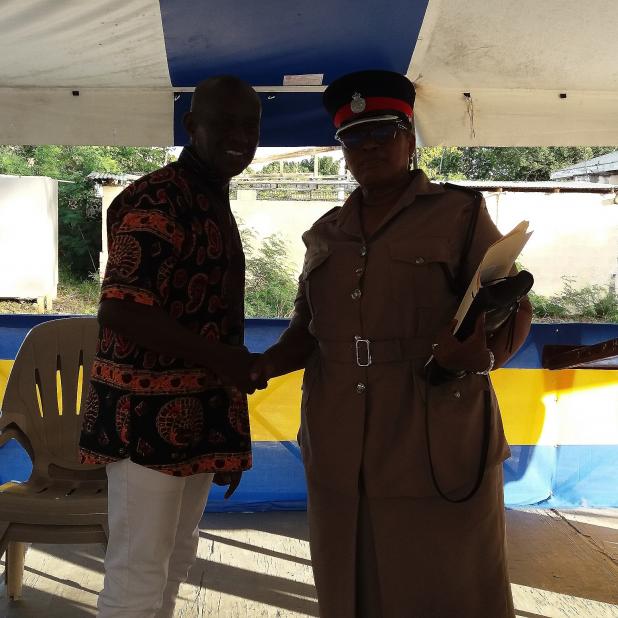 A SENIOR Police Officer is reminding members of the public that in order to maintain a low level of crime in communities across Barbados residents need to share information on suspicious criminal activities with the Police.

Superintendent of Police, Mrs. Elphene Moore, has told this to residents of Enterprise, Christ Church, who on Sunday evening officially launched their Neighbourhood Watch.

The Police Official told the audience of about 30 people, including other officers, that a stranger climbing the fence of a resident and then pulling at the door of that house must not go unnoticed. “They are also to share information on vehicles parked for extended periods, on pastures and on the roadside in communities,” Superintendent Moore said.

She also advised that the Police must be alerted about situations where vehicles without number plates are seen speeding through neighbourhoods.

The Senior Officer noted that while there might be legitimacy to some of the issues highlighted – one never knows – and therefore the information can be useful.

She pointed out that the Mission of Statement of the Royal Barbados Police Force is to provide the highest quality police service in partnership with all communities, to ensure a safe and stable environment.

As such the officers are mandated to work in partnership with all communities. “So for a strong relationship to be sustained between the Police and your community, we have Community Police Officers who are trained to provide this interface,” she explained.

Superintendent Moore remarked that the ultimate aim of a neighbourhood watch is to eliminate criminal activities in the community. She said this can be done through the combined efforts of residents supported by the Resident Officer of the RBPF, who serves the district.

Superintendent Moore who has been with the Police Force for the past 40 years, indicated that such a watch is a community-based and crime prevention initiative undertaken by residents of the neighbourhood to provide.

“It is set up to ensure the security of persons living in the district and those and others who come into the district where the Watch is located,” she noted while adding that success of the Enterprise Neighbourhood Watch will depend on residents.

Leroy Straker who has been instrumental in getting the organisation going, said that this Enterprise Neighbourhood Watch promises to be one of the best in Christ Church although there are some challenges ahead.

“But I am grateful for the support you people have given me and it shows the level of unity when people can stand behind me in light of the prevailing circumstances,” he said.