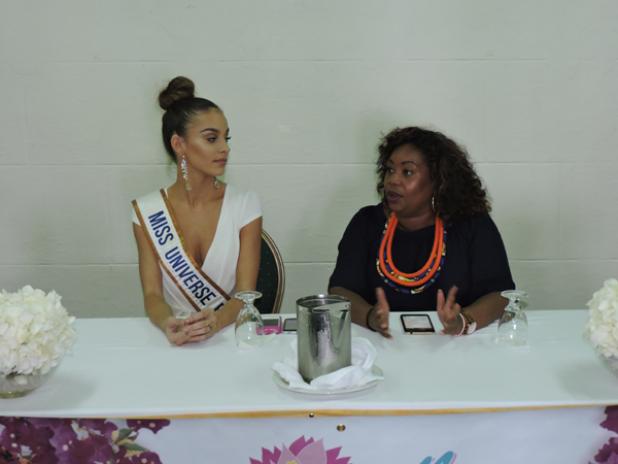 Shannon Harris is back from Philippines

It has just been a week and a couple of days since we last saw Miss Barbados Shannon Harris strutting the runway for the Miss Universe pageant, held in Manila, Philippines. The winner of that pageant was Iris Mittenaere from France; however, though Shannon didn’t make the Top 13 on the night of the show she did an amazing job, which made many Barbadians proud of her.

Speaking at a press conference at Bougainvillea Beach Resort, Maxwell Coast Road, last Friday, Public Relations Officer for Miss Universe Barbados Gaynelle Marshall said, “On board with us we have persons who deal with Information Technology (IT) and Statistics on our team. When they were able to pull the stats on Shannon Harris going into the competition the search for Shannon Harris increased via Google 600 per cent and then a further 250 per cent on the night of the show itself.” She continued, “The search for Barbados also increased by approximately 300 per cent because of one ‘pageant’ which means all of a sudden we have direct plugging interest that we absolutely could not pay for.”

Gaynelle spoke very highly of Shannon stating, “Shannon has the benefit of being a face that people have known internationally through Elite Models, which was helpful. What could be said about Shannon is that whatever skill set she thought she might have had, she put it at the door and opened herself up to complete training – no ego, always on time and always willing!”

“What Crown Events and the Miss Universe Barbados franchise looks to do, is not to find Miss Universe the first year. What we want to do is to mould girls; find the strongest girls and bring out their strengths, so that when we are finished over a course of years we should be able to impact no less than 150 girls in the most positive way,” she explained.

“The contestants in the Miss Universe Barbados competition spent no less than eight hours a week in training. They trained with me in speech – vocal and elocution. They also trained in walking and general pageant awareness. They also trained with persons in terms of aesthetic skin care and overall health. They were also registered in fitness gyms around the island, such as the Surfside Wellness Centre and Bassa Bassa gym,” she continued.

Shannon spoke about her experience saying, “For me going to Miss Universe was incredible. It was never something that I planned for. I didn’t know that it was going to happen! I never dreamed of it like that, but it did happen!” She explained, “Going up to the Philippines I was nervous, anxious and excited, just because it was something new for me and I didn’t know what being in a room with 86 pageant girls was going to be like, so I went up there feeling very
anxious.”

She said, “When I got there and I met all of the girls – which was pleasantly nice – it was shocking to see that, because usually pageants are crazy. They are all fighting for the same goal; there’s going to be a little competition tension, but there was none of that because everybody was exactly what Miss Universe stands for and that’s – confidently beautiful.”

Shannon continued, “I didn’t expect the Philippines to be that crazy over the pageant, but they definitely were. From the time we got to the airport there were crowds everywhere, security everywhere and there were children with little tiaras. Everybody was excited for this pageant. I didn’t know they were such big pageant people, not only because of Pia, but just on a whole. They have always been people that love pageants. They know every girl by name. They wanted you to sign everything they had and they would always take pictures. It was so overwhelming and I never expected it because they were always so welcoming to not only their own Miss Philippines, but to every other country, and for them to even know who Barbados is, know me by name, know everything about me – it was a great feeling!”

“We had prelims first – this is where they picked their top 13. Backstage went very smoothly; we all had our rooms and makeup sessions and the team was amazing, quick and efficient. Everything was very organised, which I appreciated because I’m one for organisation and I don’t like to feel like I’m running around like a headless chicken,” she stated.

“Going on stage was amazing. We were on stage for four days before because we were practising and rehearsing. We had to get everything down within four days. On the prelims night, I started to get nervous and I’ve never been nervous for anything in my life, but I felt the nerves come on. I tried to do my best because I know that’s where they choose their final 12, but it was very nerve- racking. I wouldn’t take back anything that I did. There is nothing I could do to change what happened. I definitely think that we all did our best in terms of everyone voting and being supportive, which I’ve never seen in Barbados before.”