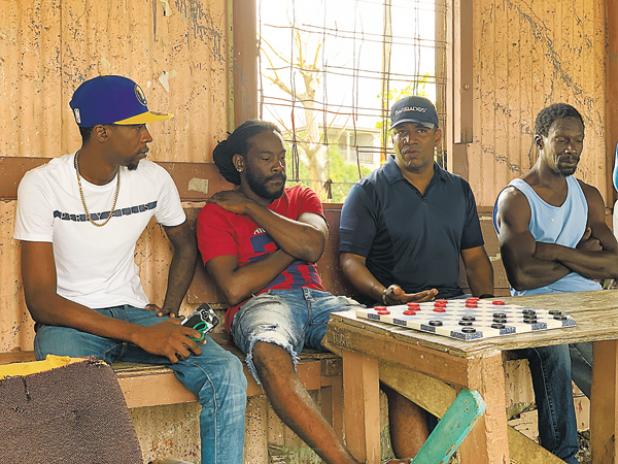 These residents had much to tell the Minister of Energy and Water Resources, Wilfred Abrahams.

Residents of St. Joseph can expect to see a stamp on each water tank that details the last time the tank was inspected and the next time that tank will be inspected.

Minister of Energy and Water Resources, Wilfred Abrahams, told the media this following a tour of the water scarce communities in St. Joseph yesterday afternoon.

“There is a particular tank in Lammings that some residents seem reluctant to use and when we visited the tank, the area around the tank didn’t look sanitary and realistically, anyone would think twice before using the tank. And we need to do better,” he said.

“We can’t just drop tanks in an area, don’t service them, let them be overgrown and then expect them to be used. The water you are pulling from a tank is intended to be used for consumption. It’s not just for flushing the toilet, but for drinking and making food etc.

“So you must have some confidence that the water you’re drinking is of a certain standard, which is why on each tank we are going to be posting the time of the last inspection and the date of the next water inspection so people can have some comfort as to when last the tank and contents were inspected, because it makes no sense to drop tanks in an area that people then don’t use and only depend on the water trucks, because it puts the water trucks under increasing pressure when they do come through the area.”

The Minister noted that they received positive feedback from residents during the tour, as many of them understood that fixing the water problem was not easy.

He stated that there was a need for the communication between the members of the community and BWA to improve so that people were alerted in a timely manner if the water in their area was going to go off, so that they could plan around these water outages.

Abrahams assured that they were taking all of the comments they received from the residents yesterday and were working on producing solutions as quickly as next week.

“That is our promise to the people in the affected areas. It is not easy and there is a lot to do, but we are working on it,” he said. (CLF)