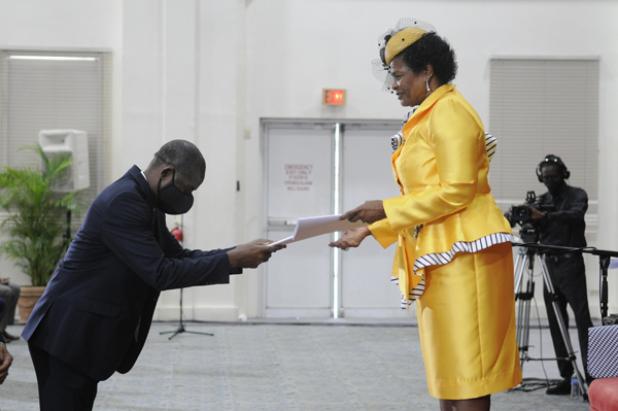 Governor General Dame Sandra Mason (right) presenting a copy of the Throne Speech to President of the Senate Reginald Farley.

During a brief session that occurred before the State Opening of Parliament that took place at the Lloyd Erskine Sandiford Centre yesterday, Senator Reginald Farley was officially elected as the President of the Senate.

Senator Jerome Walcott nominated Farley for this position of presidency and it was seconded by Senator Caswell Franklyn.
The Senator took over the presidency from Sir Richard Cheltenham, who announced his resignation in early August.

Senator Farley is not new to the world of politics, as he began his political career in 1994 being appointed to the Senate. From 1999 to 2008, he then served in the House of Assembly as a Member of Parliament for Christ Church East under the Barbados Labour Party administration.

In 2018, he went on to become the High Commissioner designate to Canada, and now in 2020, he has been officially designated as President of the Senate.

The newly elected Senate President was warmly welcomed by his colleagues, and expressed that it was truly a pleasure to be “back home” in Barbados and in the Senate. He added that he looked forward to working with the Clerk and the full staff of Parliament on his third stage of Parliamentary experience.

“I thank you for the warm welcome and I look forward to our new session of hard work,” he said.

He went on to commend Barbados on its management of the COVID-19, stating that the testing process was better, and more favourable, than testing done in Canada.

Farley explained that prior to traveling from Canada, the results for his COVID-19 test took three days to return, while the two tests he had done here in Barbados were received within 24 hours.

“I want to thank the hard-working public officials, as exemplified in this particular scenario, by those in public health for the work that they continue to do,” he said.

Following the opening, the Deputy Clerk of Parliament announced that Parliament will continue to be held at the Worthing Corporate Centre and the first session is scheduled for 22nd September.