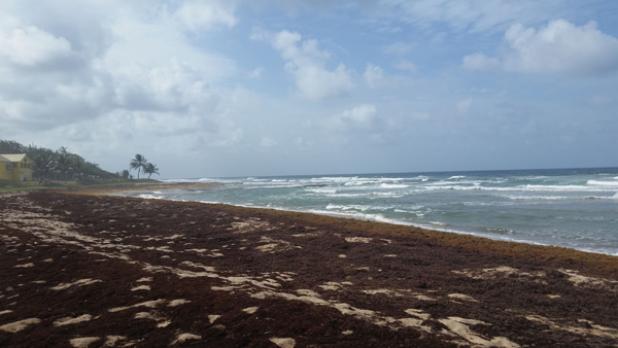 In this 2018 file photo Sargassum seaweed blankets the beach along the East Coast of the island.

Seaweed to be tackled

Government is seeking to minimise the challenges posed by Sargassum seaweed in this country.

So says Minister of Maritime Affairs and the Blue Economy, Kirk Humphrey. Speaking to the media recently on the sidelines of a tour of COT Holdings, Minister Humphrey said that his ministry has acquired a seaweed harvester to collect the potential menace before it even reaches our shores.

“I am convinced it is because of the nutrients in the water, the nitrates from the runoff in bigger countries, the rising acidity in the water, as well as the rising temperature in the water, that we are seeing this rapid growth in the Sargassum seaweed, to the point where these things have almost become an existential threat to the Caribbean in a real serious way. I am pleased to say we have recently acquired a seaweed harvester which is like a very big seaweed boat, that would allow us to clean seaweed straight off the water,” he said.

That machine, which he revealed cost just under $200 000, will be put to use along with a conveyor belt to send the seaweed directly on to the shore. Additionally, he said they have invested in a tractor, which is being modified to be able to pull the seaweed off the sand. He indicated that those other pieces of equipment together with the harvester pushed the cost to just over $200 000. He explained the goal is to “capture the seaweed when it is still fresh and when it is best able to be reapplied, or redirected, or reused into something else”.

Minister Humphrey indicated that if the harvester works, they hope to acquire another or two or three of them to help address the challenges posed by the seaweed annually. He said the harvester arrived on island earlier this year and they hope to unpack it soon and put it to use.
(JRT)