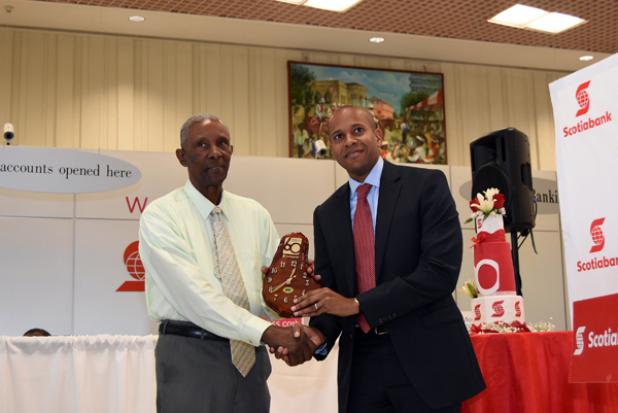 Alister Archer, left, one of the first employees of Scotiabank Barbados accepts an appreciation award from Managing Director, David Noel.

Thu, 04/21/2016 - 12:00am
Over the coming six months Scotiabank Barbados will undertake a number of activities as the bank celebrates 60 years of operating in this country.
Speaking yesterday morning during the official press launch of the anniversary celebrations at the Broad Street branch, Scotiabank’s Senior Marketing Manager, Lisa Cole disclosed that in addition to several customer appreciation days, there are several events also on the calendar to thank the staff for their dedication and commitment to the company.
“[However,] our biggest impact will be in the community. We pulled all our initiatives together under the umbrella ‘60 Ways to Show We Care’. In some cases we have enhanced our sponsorship in recognition of our anniversary, such as the moving display of our annual School Environmental Art Project on which we partner with the Future Centre Trust. And we are actually kicking off that project on Earth Day which is the end of this week and it ends in June on World Environment Day,” she said.
A proud sponsor of the annual Junior Monarch Competition for the last 20 years, Cole said the bank will, this year, also be giving to the Cherry Tree Trust and sponsoring the Heritage Art Contest for children through the Barbados Museum. This contest, she said, is being held in honour of Barbados’ 50th anniversary of Independence. Additionally, she said that staff members are being encouraged to give back to the community, and so each department has been tasked with developing a social project.
“Giving back is part of our culture here at Scotiabank and we already have had volunteer groups active in the community – debushing at Sharon Primary and painting at Eden Lodge Primary before the start of this term. And finally we are excited to announce that we will be undertaking an initiative to encourage reading at the primary level,” she said.
She revealed that they will be establishing start-up libraries in several primary schools as well as reading programmes supported by Scotia volunteers, as they recognise that nurturing an enthusiasm for reading is essential for building a well-educated population.
During yesterday’s launch the bank also paid tribute to three of their first customers and one of the first employees to work for the financial institution. (JRT)