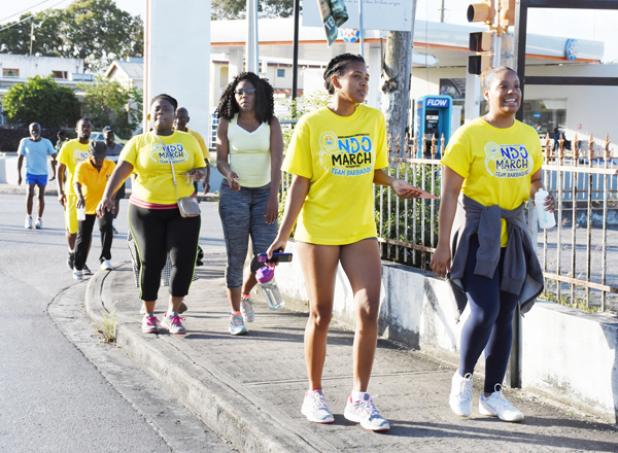 Persons from all walks of life came out in support of the march.

Scores turn up for first ever EndoMarch

Taking the ‘Time to End the Silence’, scores of Barbadians turned up at Brandons Beach yesterday to participate for the first time in the worldwide EndoMarch.

Co-ordinated by the Barbados Association of Endometriosis and Polycystic Ovarian Syndrome, the walk was aimed at raising awareness on the debilitating pelvic disorder.

Endometriosis is a chronic gynaecological condition where the cells which normally line the uterus during the menstrual cycle – the endometrium – are found on or in other regions of the body, such as the pelvis, the ovaries and the large intestines. Displaced endometrial tissue continues to act as it normally would – it thickens, breaks down and bleeds with each menstrual cycle; and because this displaced tissue has no way to exit the body, it becomes trapped.

When endometriosis involves the ovaries, cysts called endometriomas may form. Surrounding tissue can become irritated, eventually developing scar tissue and adhesions – abnormal bands of fibrous tissue that can cause pelvic tissues and organs to stick to each other.

Just after six, Team Barbados left Brandons and headed down Spring Garden, past Westbury on President Kennedy Drive onto Black Rock main road before heading back to the beach.

Delighted with the large turnout, President of the Association Julia Mandeville expressed happiness that education efforts on the condition were growing, while extending thanks to the sponsors and participants.

The seven-kilometre march was one of the highlights of this month’s Endometriosis Awareness Month. (JMB)