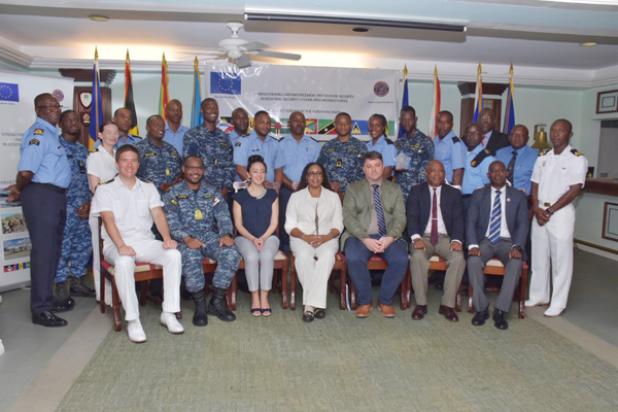 Members of the graduating class and their instructors.

The members of the Regional Security Services were recently commended for their ability to operate as one division despite being from different regional countries.

Lieutenant Matthew Irwin of the Royal Navy formally commended the members of the RSS during the graduation ceremony of the RSS Training Institute’s Officer of the Watch Course 2019, which took place at the Barbados Coast Guard yesterday morning.

“One thing that struck me while being here is the support within the RSS; apart from the fact that you wore different uniforms there was very little to indicate to me the diversity of nations, and I really commend you, for that cooperation and that desire to achieve a singular goal is super commendable,” he said.

He noted that this ability to work seamlessly to achieve a singular goal was something he believed members of the Royal Navy could take note of.

To the 14 officers that graduated, he told them that this graduation was not the end, it was the beginning of their career, as “you never stop learning every time you step foot on the bridge.”
He urged the graduates not to rely too much on their gadgets.

“Your ships are blessed with some pretty fancy kit yes, but these are not a substitute for good lookout and sound seamen practices, doing those basic drills correctly is what is going to keep you safe at sea,” he said.

Sub-Lieutenant Jamal Crick of the Barbados Coast Guard expressed that he was proud of the fact that despite the many challenges the officers faced during the training period, they were able to complete the course successfully.

He explained that the course, which began May 13, 2019 and ran to August 23, 2019 was done in three phases; the online phase, the residential phase and the practical phase, where the training officers travelled to St. Lucia and St. Vincent and the Grenadines to conduct their practical assessments.

The aim of the course was to train a cadre of officers from the Regional Coast Guards and Maritime Police, and included officers from Antigua and Barbuda, Barbados, Grenada, St. Lucia and St. Vincent and the Grenadines. (CLF)