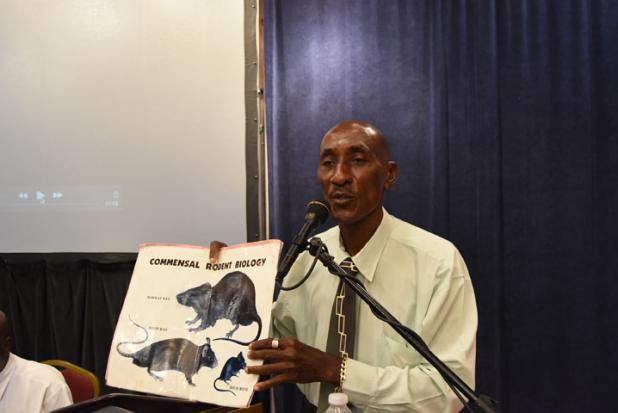 With this island recording 380 leptospirosis cases since 1999 and 19 related deaths, Barbadians are being urged to take serious steps against eradicating the rat population.

“Build Them Out, Starve Them Out, Kill Them Out,” is the cry of the Environmental Health Department as they advised Barbadians on how to get rid of such rodents from their properties.

During Thursday’s Central Bank of Barbados/University of the West Indies Lunchtime Lecture at the Grand Salle on how to fight the island’s rat population, Principal Environmental Health Officer of the St. Philip Polyclinic, Maurice Gaskin, and Senior Environmental Health Officer at the David Thompson Health Complex, Richard Bourne, made it clear that prevention is critical to ensuring the health of the society.

Gaskin pointed out that mice and rats are able to breed every three to four months, meaning that “a rat which is a mother in March can be a grandmother by July”, and produce six to eight young per litter.

He stressed therefore that left unchecked, the rodent population could get out of hand rapidly, and pleaded with home owners to keep their surroundings clean, the grass around their property cut low and to remove left-over pet food after feeding time.

Speaking on how to use bait, Gaskin reminded persons not to allow the rodents to have any other food option and not to spread the bait “like scratch grain” as the rats need to eat at least eight pellets for the poison to be effective.

Bourne also insisted that persons desist from illegal dumping, noting that while individuals may believe that by throwing garbage away indiscriminately would not affect them, one of their relatives and friends may be infected by the disease by a rat which was able to thrive on dumped garbage.

“You may live in St. Lucy and go and decide to go dump in St. Philip, and a rat gets into it and ends up giving one of the people you know leptospirosis or another disease. So we all have a responsibility to get rid of our garbage through the proper channels,” he said. (JMB)