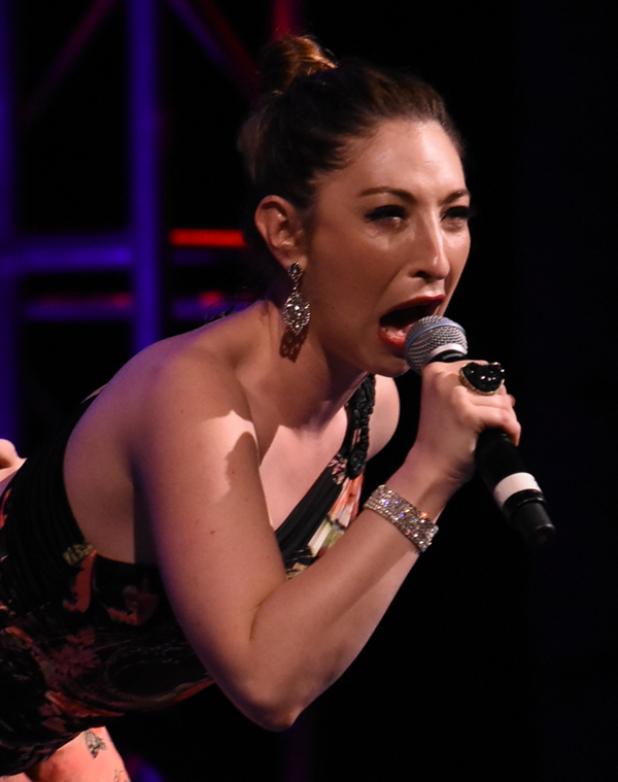 Imitationist and Entertainer Jess Robinson during her interactive and entertainer performance.

Comedy night at Holders Hill was the place to be last Tuesday, where patrons were treated to varying forms of entertainment through comedy and cabaret.

Steve Ross, the famous cabaret entertainer, gave the audience a taste of what he is known for. The Ultimate press refers to Ross as the Ultimate Sleek Smartness, which is ever present during his one of a kind performance.
Behind Ross’ unassuming looks is an entertaining individual and Holders season was the better with his performance.
Newcomer Jess Robinson revved up the atmosphere and kept patrons thoroughly entertained with her musical impressions of over 57 different artists. Artists of different genres of music and walks off life such as Madonna, Whitney Houston, Christina Auguilera, Edith Piath and Julie Andrews to name a few.
Robinson’s performance was highly comical and entertaining. It kept the audience in stitches of laughter, especially her impressions of Kate Bush and Judy Garlin.
Her interactiveness with the audience was also remarkable, especially when she handpicked one gentleman from the audience and attempted to teach him the technique to position his voice to do an impression of Judy Garlin.
Young Robinson can be described as a gem in a haystack, because not only is she talented with imitations she is also gifted with a beautiful voice which emphasized her performance.
She ended her performance singing in her own voice as a tribute to her mum who is always asking her to use her voice on a more regular basis.
She told the Barbados Advocate after the show, I have been doing impressions for ten years. I never meant to be an impressionist. I meant to be a serious singer and musical theatre. I started with singing impressions.
I have been very lucky as a female impressionist because there are not as many female impressionists in London to compete against. She noted, my biggest challenge as an impressionist is keeping up to date because there are a lot of new singers out there to learn. One such person I can’t do is Rihanna but I’m hopeful I can learn her voice.
Robinson noted, “Muscle memory is the key to remembering the different voices. The more you do it the more your muscles remember how it has to be for that particular voice.”
She revealed, “One of the first voices I learnt was Julie Andrews from the Sound of Music. I simply love Julie Andrews. The voices of Shirley Bassy and Billy Holiday was the hardest for me to learn and presented a challenge but once you learn the voice you do not forget. To this day Billy Holiday is one of my” favorite classic diva’s and I love doing imitations in her voice.”