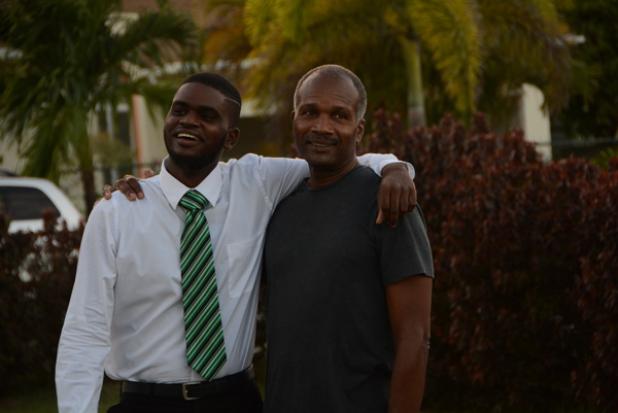 Trey Cumberbatch (left), who is the Rhodes Scholar for the Commonwealth Caribbean for 2021, is all smiles as he is congratulated by his dad, Dave Cumberbatch.

Trey Cumberbatch had several reasons to celebrate yesterday. He was chosen as the Rhodes Scholar for the Commonwealth Caribbean for 2021.

The 23-year-old is a graduate of The University of the West Indies (UWI), Cave Hill Campus with a Bachelor of Science in Psychology (First Class Honours). He intends to study for a Master of Science in Evidence Based Social Intervention.

Cumberbatch was selected from among eight candidates who were interviewed on Tuesday. The announcement of his winning was made by Governor General, Dame Sandra Mason at Government House. The other candidates vying for the scholarship were from Grenada, Dominica, Trinidad and Tobago and Antigua and Barbuda.

In brief remarks, Dame Sandra said this year the Selection Committee had “a cadre of very erudite, intelligent and articulate young Caribbean people” to select from and “each one of them could easily have been given the scholarship because they have vision and we know that wherever they go as our Barbadian anthem says, ‘they will do credit to our nation’.”

This is Cumberbatch’s second time applying for the scholarship, he previously applied in 2018. Speaking to the media at his St. Phillip home, he said he was elated to have won. The mental health advocate, who did “a triple minor in Gender and Development Studies, Psychology and Sociology” at the UWI, Cave Hill Campus, shared how he hopes to better Barbados through his studies at the University of Oxford.

“I know you guys will be aware that the Minister [of Health and Wellness] promised a mental health policy. I very much want to be at the forefront in terms of the development of that policy and making sure that policy meets the mental heath needs of the Barbadian population. I think as a society and a culture, we have ignored it for far too long and we need to have it written in policy that mental health is important and we have things in place to make sure that people have access to mental health care and it is affordable. So the policy programme at Oxford will definitely help me in terms of how to formulate a social policy, how to evaluate a social policy and make sure that it is utilises the country’s resources to the best of it ability.”

Cumberbatch credited his parents, his late mom, Shirnell Greenidge-Cumberbatch and dad, Dave Cumberbatch for his achievement.

His father told the media he was proud of his son and he too gave credit late mom, Shirnell.

“She passed seven years ago. She was the one who worked with him from small. She taught him to read, to write [and] to use a computer. I am just sorry she is not here to share in his achievement, so I give all the credit to her.” (MG)