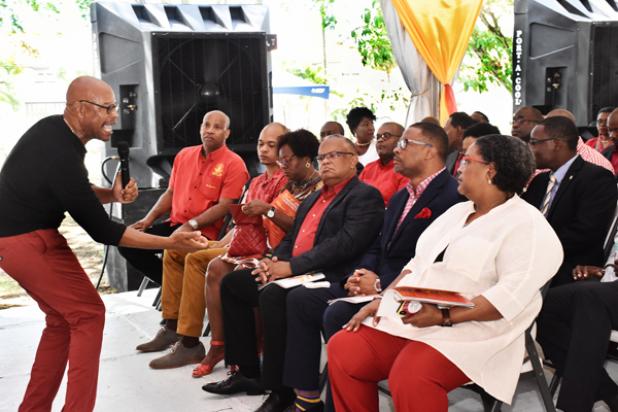 Premier of Nevis, the Hon. Mark Brantley, is adamant that this region’s extreme vulnerabilities as Small Island Developing States must be taken into account when eligibility for developmental assistance is being determined.

Absenting such considerations, he believes small nations will be forced into a never-ending cycle of borrowing, oftentimes at commercial rates,which ultimately leads to the dreaded debt trap in which so many islands find themselves.

“And yet the international community remains largely insensitive to our legitimate concerns,” he lamented.

Brantley was the featured speaker on the final day of the Barbados Labour Party’s (BLP’s) 81st conference at Queen’s Park yesterday.

He recalled that Barbados, like many in the Caribbean and elsewhere, were blacklisted by the European Union, and suggested “perhaps in their desire to treat the independent status of small countries as mere fig leaves, politicians and bureaucrats perched in Brussels are now seeking to dictate the tax policy of independent countries globally”.

“The message now is do as we say or risk crippling reputational damage. And we know and must not tire of saying that these rules are disproportionately applied to the smallest and most vulnerable of States while powerful countries such as the United States are immune from the dictates of Brussels.

“In my own little Nevis we have seen a 30% reduction in new financial services business this year due to our amendments to the financial services legislative framework to pacify Brussels. The evidence would suggest that business lost is now fleeing to States in the US such as Delaware and Nevada, which are immune from the reach of the EU, the FATF, the OECD and others. There is, my friends, no level playing field and no effort to ensure that all are required to play by the same rules,” he maintained.

“Each cycle of demands by the EU, FATF, OECD and others result in a capitulation of small countries like ours. Each capitulation leads to greater and more onerous demands.”

The Premier, who is also the Minister of Foreign Affairs of St. Kitts & Nevis, therefore warned that countries’ hard-won independence is being slowly eroded by new efforts at colonial domination. In fact, he made it clear that the EU and others must understand that Barbados and the Caribbean do not desire confrontation and acrimony.

“We require genuine partnership and respect,” he stressed.

Furthermore, Brantley said this risk of blacklisting and the reputational damage caused thereby then feeds into a vicious false narrative that countries of the region are “tax havens”, incapable of effectively regulating and managing their financial systems.

“This in turn leads to a withdrawal of correspondent banking services to our region. This phenomenon of derisking, as it has been called, has the potential to cut off the Caribbean region from the global financial system. If that happens, how will we manage? How shall we buy goods and services abroad or accept payment for them here in Barbados? Will we be forced to revert to a system of barter?”