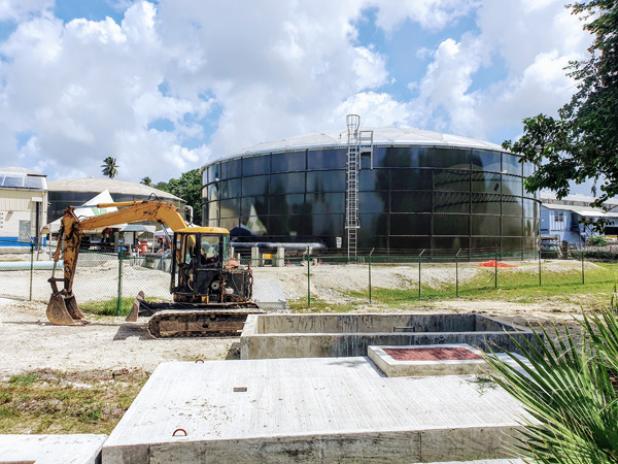 Ionics Desalination Plant with workers in the area carrying out maintenance work.

Residents along the area of Highway 1, Black Rock St. Michael, arose from their slumber on Monday morning to various water outages being experienced in and around the area. This service disruption was called by the neighbouring Ionics Desalination Plant, as it conducted its annual scheduled maintenance procedures which kicked off late Sunday evening.

Upon visiting the area during the early hours of Monday, workers from the Barbados Water Authority (BWA) could be seen on the site of the plant carrying out work which the BWA had promised would be done in order to mitigate any loss of supply caused to the service for customers.

In speaking to a female resident who resides in the area of Ashdeane Village, Black Rock, it was revealed that though the loss of water pressure was a big inconvenience for her, she was well aware of the water crisis the country was currently facing.

“My son phoned me earlier [Sunday] evening and told me to catch water because the plant near the highway had work to carry on. That was not so good for me because I had plans to wash today and do a nice general cleaning around my home, but after hearing about the issues with water my friends who live in the country had over the years, I honestly can’t be too upset,” she said.

When asked if she had seen any water tankers making their way through the area, she did not hesitate to say she had not seen or heard of any activity.

“A water truck? No please I can’t say I saw any. Any time we have water issues it’s rare for us to see any trucks make their way around here, so I can’t tell you otherwise.”

These outages are a part of a long line of water issues the island has been experiencing for some time now with many locals questioning water they will see any reprieve in the near future. (SB)