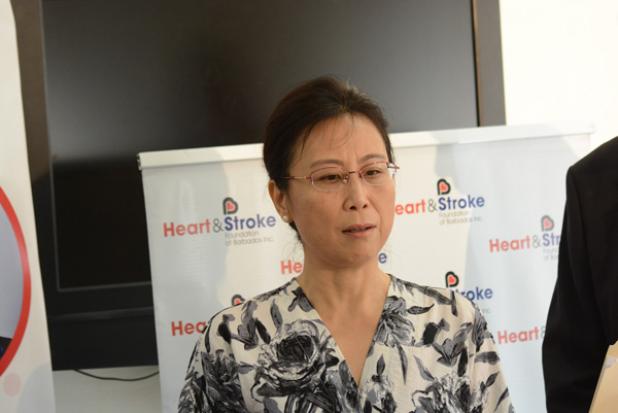 Rehabilitation of Gymnasium scheduled to finish by mid-July

Fri, 01/20/2017 - 12:00am
By:
Cara L Foster
The rehabilitation of the Garfield Sobers Gymnasium Complex, is expected to be completed in mid-July this year, which, according to Chinese Ambassador to Barbados, Wang Ke, is right on schedule.
Wang Ke revealed this to the media on Wednesday evening at the Headquarters of the Ministry of Education, Science, Technology and Innovation. “We are trying our best to finish by mid-July in order to ensure that Barbados can take the newly rehabilitated gymnasium and host the CARIFESTA,” she said.
Ke expressed that the rehabilitation project of the Gymnasium, which is being carried out by Chinese engineers utilising China’s grant, and the instalment of the first Chinese medical team stationed at the Queen Elizabeth Hospital (QEH) as a form of a soft grant from the Chinese government, has added some new elements to the bilateral cooperation between the two countries.
She revealed that this cooperation in agriculture, education and health care has kicked off the celebration of the 40th Anniversary of China-Barbados diplomatic relations this year. She announced that China and Barbados have enjoyed a “healthy and stable bilateral relation” since the diplomatic establishment 40 years ago. “In recent years, we have witnessed frequent high-level exchanges and political dialogues and rapid development of bilateral collaborations in many areas including defence, education, culture, people-to-people exchange and medical service,” she said.
Ke went on to say that based on equality and mutual benefit, without the attachment of any political strings, China has provided at least 22 grants to assist the social and economic development of Barbados and considers the Garfield Sobers Gymnasium Complex and Cheapside Market as monuments of their friendship.
She assured that China will remain committed to continue working closely with Barbados, in an effort to deepen the pragmatic cooperation in all fields and to push their friendly and cooperative relations to new heights so that better benefits are achieved for both countries.