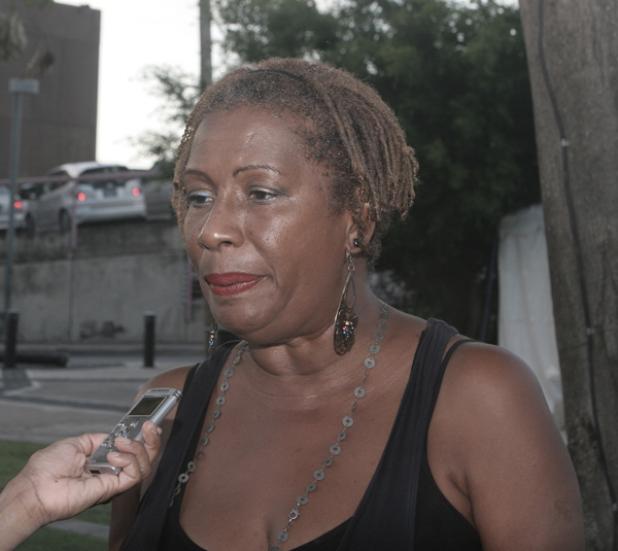 Manager of the Frank Collymore Hall and Chairperson of the You Pan Project, Fran Wickham-Jacobs speaking with The Barbados Advocate on the sidelines at the Youth Pan Extravaganza yesterday evening at the Church Village Green.

Sun, 07/24/2016 - 12:00am
By:
Patricia Thangaraj
Register early because the programme gets full every year.
This is the advice that the Manager of the Frank Collymore Hall and Chairperson of the You Pan Project, Fran Wickham-Jacobs is sending out to parents of young persons who are interested in joining the Youth Pan Extravaganza for 2017.
Speaking with The Barbados Advocate on the sidelines at the Youth Pan Extravaganza yesterday evening at the Church Village Green, she said that they were able to make an exception this year and accommodate two additional students.
However, they usually only have 20 students per class. The project is divided into three groups. These are Juniors who range in ages from nine to 13; Intermediates, who range in ages from 13 to 16 and Seniors range in ages from 16 to 18.
However, they do not hold strictly to these age ranges because if a young person is performing above his or her age level, then they can advance to a higher class, she said.
Dominic Lewis teaches the Juniors, Jacob Williams teaches the Intermediates while Andre Forde teaches the Seniors in this annual programme, she said.
This year, the students looked at the music of the different islands within the region and then each group was able to put on three different projects which highlighted some form of masquerades, music and rhythm.
She stated that the youth perform at the Closing Ceremony for the Workshop which is held at the Queen’s Park Steel Shed and then this Extravaganza.
The project which has been going on since 2002 and they are now in their 15th year with 62 children who were involved with it, all learning their pieces within 75 hours over the span of three weeks.
As for extending the programme next year so that more students can be accommodated, Wickham-Jacobs said that unfortunately, this is not possible as they want to make sure that each young participant gets as much learning time and attention as possible which is only possible with smaller classes.
However what they do try to do every year is to accommodate all groups from the those who are accomplished in the steel pan to those who are continuing learning this instrument as well as those persons who are have not learnt it as
yet. “So it is a good mix.”
The majority of the young persons who take part in this programme belong to orchestras or bands in their respective schools, communities, churches and other groups and are brought together for this event, said the Chairperson.
Wickham-Jacobs said that the project involves more than just learning to play the steel pan. It also involves learning about the origins of this instrument, the theory aspects and they were also given a project this year on Caribbean sounds and masquerades and this is why the theme for this year’s event is ‘Rhythm and Mas: One Caribbean.’