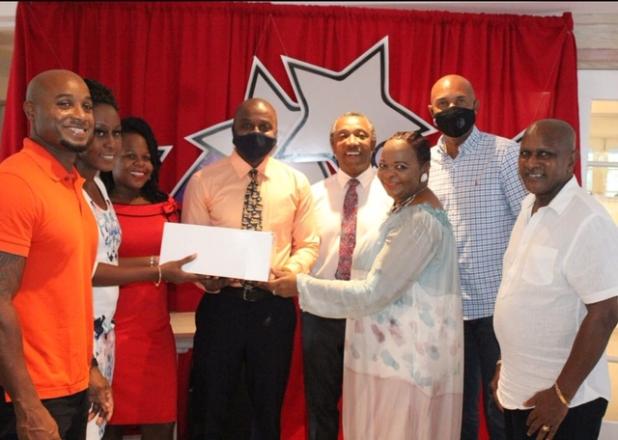 One local charity has plans to assist Barbadian students annually.

Master of Ceremonies and committee member of RED Foundation, Carl ‘Alf’ Padmore stated this during his opening remarks recently. He spoke about the fund-raising efforts of the charity for back-to-school and said with the impact of COVID-19, it is important to help their community.

The charity’s Back To School Committee was formed to provide all primary school students in Christ Church with school supplies.

Parliamentary Representative for Christ Church South, Ralph Thorne spearheaded the back-to-school supplies project along with The RED Foundation. The charity sent a letter to the 11 schools in Christ Church to find out what each school needed. Last month, a celebrity T20 cricket match was held to raise funds for the community initiative. At the recent presentation, well-known Barbadian and West Indian cricketer and supporter of the charity, Tino Best joined the head table along with Chairman of The RED Foundation, Alvin Jemmott, patron “Red Plastic Bag”, Stedson Wiltshire, East Point Consultancy Representative, Atoya Hinds, and Member of Parliament for Christ Church South, Ralph Thorne.

Earlier, Jemmott indicated that the charity will be helping Barbadians during the upcoming Christmas season with a fund-raising initiative called “Walk The Talk”. He said that this year, they have been assisted by people outside the region. Over two hundred tablets were donated to Barbadian schools through Carrie-Lyn Grazette Cancer Foundation of Atlanta.

The Red Foundation Chairman also revealed that the charity has a school bag project and the organisation received support from the Barbados Association of Central Florida.

In 2017, the RED Foundation, a non-profit organisation was founded by Cultural ambassador, Dr. Stedson Wiltshire, “Red Plastic Bag” who wanted to give back to Barbados. The RED Foundation team aims to help Barbadian children thrive by creating a social community that empowers, encourages, and nurtures the youth while passing on wisdom, customs, standards, and practices synonymous with the Barbadian culture.