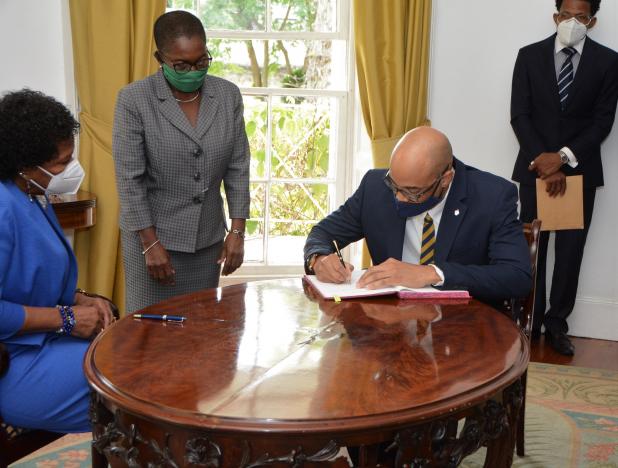 Newly appointed Independent Senator Julian Hunte, says that while the industrial relations climate is generally peaceful, the trade union movement is facing some new issues which have to be addressed.

He was speaking to members of the media yesterday morning, just moments after being sworn in at Government House by Governor General Dame Sandra Mason. Senator Hunte, a former Deputy General Secretary of the Barbados Workers’ Union, now Assistant Registrar at The University of the West Indies, Cave Hill Campus with responsibility for industrial relations, said there are matters which are ongoing which the trade union movement has previously not had to deal with, and it requires a “recognition that robust and frank discussions are going to have to happen”.

“I think that generally we are going to be striving towards striking a balance between the rights which labour has fought for and won over the years, with the responsibility that comes with our country’s capacity to maintain those rights, those privileges. So that there is going to be a person such as myself, with my preparation, having seen both sides of the negotiation table as it were – as a representative of labour and a representative of the private sector, I think that I am able to bring a type of balance which is needed especially at this time,” he stated.

The former trade unionist went further stating that “the fate of labour is in the hands of labour and as such labour just has to recognise and step forward to embrace the responsibility that lays in front of it especially in the current environment”.

Asked about the leadership of the movement, Hunte went further stating that he believes that those in the various positions are carrying out their respective mandates as best they can, but he said there can always be improvements.

“And what I know of the labour movement is that it is a movement headed by persons, carried by persons, who are committed to the best interest of Barbados and as such I am satisfied that they are going to be steadfast in pursuing that type of approach,” he stated.

Hunte’s comments came as he expressed appreciation to Dame Sandra for offering him the opportunity to serve as a senator.

“First of all I would like to say what a tremendous honour it is to have been asked by Her Excellency to act as a Senator, an Independent Senator where I will be drawing on my experience serving at a senior level in the trade union movement and in the private sector. I will be focusing primarily on matters and perspectives as they impact upon the trade union movement and the practice of industrial relations in general,” he said.

He added that his appointment is also an opportunity for him to give back to his country and do his part to ensure that the interest of labour and the interest of all who practice industrial relations is heard and adequately represented.

Meanwhile, Dame Sandra spoke about why she chose Hunte for the position left vacant due to the resignation of General Secretary of the Barbados Workers’ Union, Toni Moore to contest the upcoming St. George North by-election.

“I needed someone to look after the question of labour, trade unionism and industrial relations in the Senate, which as you know was very ably dealt with by former Senator Moore, and I am given to understand that Mr. Hunte is quite capable and I am happy to have him as a Senator in the Senate,” she stated. (JRT)