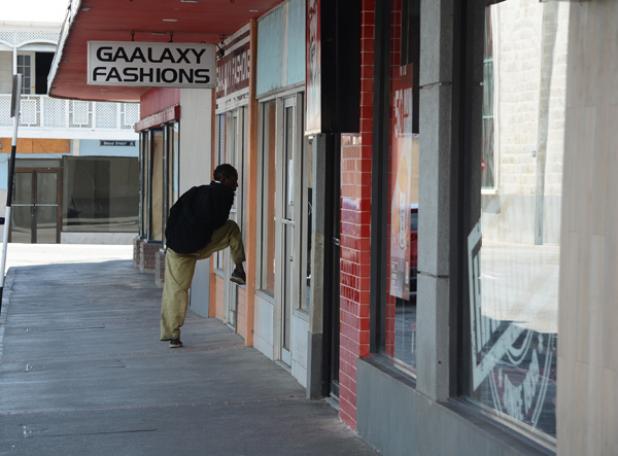 This gentleman was clearly intrigued by something in this closed shop window.

There are still too many persons on the roads. This is the sentiment of the Royal Barbados Police Force as the island adjusts to its 24-hour curfew, which came into effect at midnight at the start of this past weekend.

Speaking to the Barbados Advocate yesterday, Public Relations Officer Inspector (Ag) Rodney Inniss explained that things have been going well for the most part, but wanted to remind persons that the island was still under a curfew. “Some people are using all types of excuses to get out of the house – some legitimate, some not – but we want to remind those persons that police will be checking and we want them to comply because we are fighting a pandemic. We are not fighting against their freedom or their rights to be out. We are fighting a pandemic and that is the law and that is what is required by the health officials and we should really comply,” he said.

With an 8 p.m. to 6 a.m. curfew being imposed earlier as a response to mitigate the spread of the dreaded COVID-19 virus in Barbados, members of the public took advantage of the situation and were still congregating in many public spaces during daytime hours. Against this backdrop the Ministry of Health augmented the Stage 3 response of the National COVID-19 Preparedness Plan to see a 24-hour shutdown of the island with limited movement only for essential business.

However, with Barbadians almost completely staying indoors after sunset, Inspector Inniss said that they had yet to understand the importance of staying at home during the day as well. “During the night has been very, very quiet, but during the day we have being seeing a lot of movement of vehicles and we wonder if all those persons actually need to be on the road. So we are advising again, if you don't need to be out there, you should really stay at home.”

Since the first curfew came into effect at the end of March, two persons have been charged after being out. The highly-publicised first case was a female Jamaican national, this past Friday, a male was charged with breaking the curfew along with other offences.

Inspector Inniss said that he believed that persons were taking heed to the curfew, especially at night but added that of the persons traversing the island during the day, they were not all conducting essential business and he therefore asked them to stay home for their own health and safety. “The plea of the Force will remain. Comply with the protocols that are in place, acknowledge the 24-hour curfew. I know persons will get bored at home, but try different things. Only go out if you absolutely have to and you are exempted to – if you are going to a pharmacy, if you are going to a local bread shop or something like that. We are asking you to comply. We are in this together and we trying to do our part so we can only be successful if members of the public comply as well,” he said. (MP)