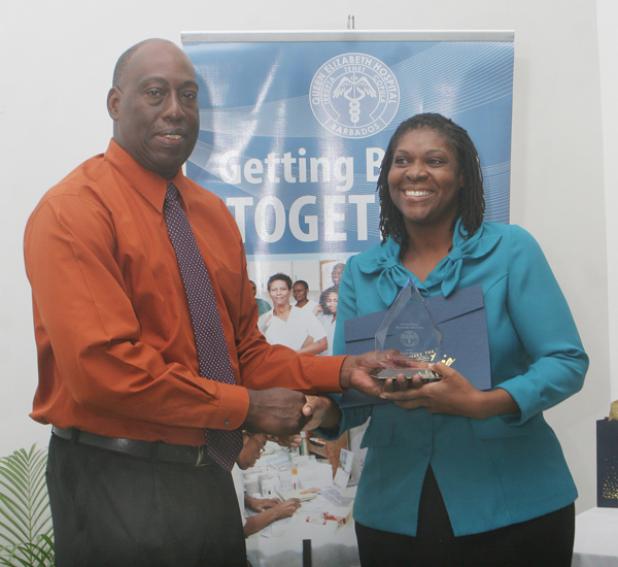 Chief Executive Officer of the QEH, Dr Dexter James presented Executive Secretary at the QEH, Sophia Thomas with the Unsung Heroes: Beyond the Call of Duty R.E.S.P.E.C.T Award

Tue, 07/19/2016 - 12:00am
The Queen Elizabeth Hospital (QEH) continues to recognise staff who have shown outstanding commitment and dedication to their duties.
Yesterday, during the Rewarding Excellent Service Promotes Employee Commitment and Teamwork (R.E.S.P.E.C.T) Employee Recognition and Rewards Programme ceremony, Dr Anne – Marie Hassell received the award for Excellence in Patient Care; the Service Excellence award went to general worker Ernesta Thomas-Harvey; Special Thanks and Recognition (STAR) award to Dr Shazad Mohamed; while Executive Secretary, Sophia Thomas and Driver/Messenger, Justin Sobers both received the Unsung Heroes: Beyond the Call of Duty award.
Chief Executive Officer (CEO) of the QEH, Dr Dexter James, congratulated all awardees. Launched in 2011, he said the R.E.S.P.E.C.T programme objectives include enhancing the awareness of employee success, promoting a positive work environment by assisting in improving individual attitudes and recognising significant individual accomplishments.
“We are demonstrating our acknowledgment of the special efforts and commitment of you our employees and the value we place in you. I am sure this activity will go a long way in generating much good will, opening team spirit and improve staff morale,” he expressed.
“Our version of this recognition programme has been developed to meet two key human resource requirements. Firstly, the need to instantly empower and reward staff who have performance well and secondly, to give management and supervisors a tool to motivate and appreciate staff.”
Showing its dedication, the CEO revealed that the Board of the QEH has committed $24,000 for the financial year 2016-2017 towards the R.E.S.P.E.C.T programme.
Dr James further acknowledged that the benefits of the R.E.S.P.E.C.T programme are many, but noted that those of significant importance are – an ideal vehicle to say thank you to individuals and teams, build team spirit and loyalty, encourage job security, demonstrate that the organisation truly cares and give status and prestige to employees and teams.
Also during the ceremony, the QEH recognised Consultants who contributed in a significant way towards the development of services by conferring to them Honorary Consultant status. (TL)