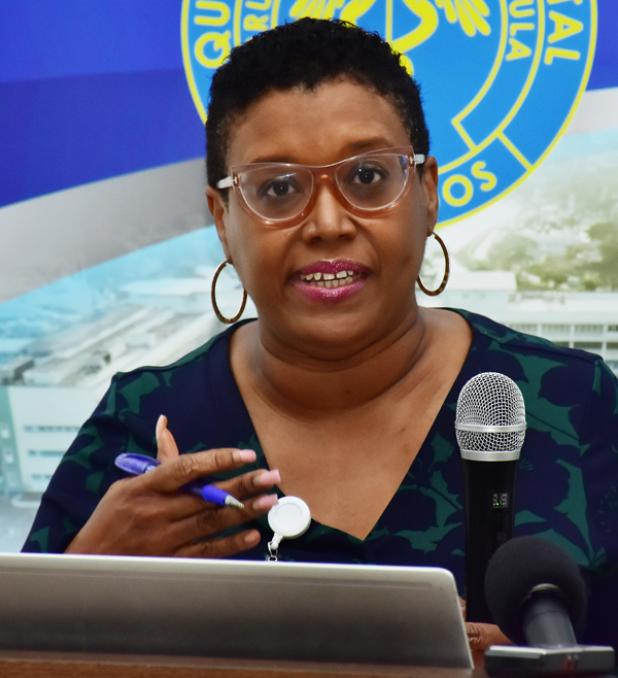 Juliette Sutherland-Bynoe, Executive Chairman of the Queen Elizabeth Hospital, gave an overview of the the response of the QEH to the COVID-19 pandemic and its strategy for the safe resumption of out-patient and elective surgical services.

QEH ahead of the curve

Where even the most modern and internationally renowned medical facilities in the world were caught unawares when the COVID-19 pandemic struck, our very own Queen Elizabeth Hospital (QEH) was ahead of the curve.

Yesterday a press conference was held to outline the response of the QEH to the COVID-19 pandemic and its strategy for the safe resumption of out-patient and elective surgical services. Juliette Sutherland-Bynoe, Executive Chairman of the QEH explained that there has been a national mandate to isolate the QEH from COVID-19 for as far and as long as possible. She highlighted that by observing the paths taken by China, Italy and others who had been battling the virus long before it reached our shores, the QEH had the opportunity to learn and understand that it was possible to manage the pace of the pandemic, all the while protecting the hospital.

“Part of that reasoning, of ensuring that the hospital was insulated, was to ensure that vulnerable patients were not infected." said the executive chairman.
Expanding further, Sutherland-Bynoe outlined that the insulation plan was also to make sure that the staff of the hospital was not overwhelmed. Many health-care systems were overwhelmed around the world because of the speed at which COVID-19 spread causing the staff to be overwhelmed, systems broke down and there were cases of insufficient Personal Protective Equipment (PPEs).

Acknowledging that the open plan facility was built in the 1950s and was not built for the kind of diseases and epidemics which face the world, Sutherland explained that proactive plans were made to fight COVID-19 and for the future of the hospital. One of the precautionary aspects was to build hospital facilities outside of the QEH, which could accommodate patients. As a result facilities were adapted at Paragon, adapted at the Blackman and Gollop Primary School and one was newly built at the Harrison Point. So far, the QEH has tested several patients who have presented themselves to the emergency department with 12 positive results, the last being on April 11th.

The QEH developed a three-pillar plan with the focus on staff safety, patient safety and service delivery. The plan would ensure that staff was provided with accurate information on a continuous basis, never lacked supplies including PPEs and was provided for in all aspects. There was also accommodation for staff in isolation centres and counseling provided. Sutherland-Bynoe also outlined current measures of restricting visitors to protect the patients, a security triage for entry, discharge planning, the reduction of any crowding throughout the hospital and "what if" contingency plans along with simulations. Regarding service delivery, the support element of the QEH was addressed where a foundation of support was put together consisting of private labs to conduct COVID-19 tests, private clinics and the use of technology for a Help Desk and telephone or video consultations.

Before the social distancing measures were employed during the early stages of the pandemic, the QEH was wise in outlining the strategy to the staff. The initiative of being prepared for every stage of the national pandemic plan was also birthed by the management of the QEH, understanding that because of the nature of the institution, it needed to be ready even with a day's notice.

"We recognised you could move from one stage to the next stage, perhaps in the space of a day and as an institution, we likened ourselves to a cruise ship, not able necessarily to be as adaptable as a speed boat, so we had to get ahead so that if we were to move or change course, we were already in the process of changing course by the time the other stage was taking place." explained the executive chairman.

Sutherland-Bynoe also lauded the efforts of Dr Corey Forde, Head of the Infection Prevention and Control/Infectious Diseases Programmes at the QEH, along with his department for moving swiftly and decisively as early as January this year, to alert the QEH to prepare for the possibility of the coming pandemic.