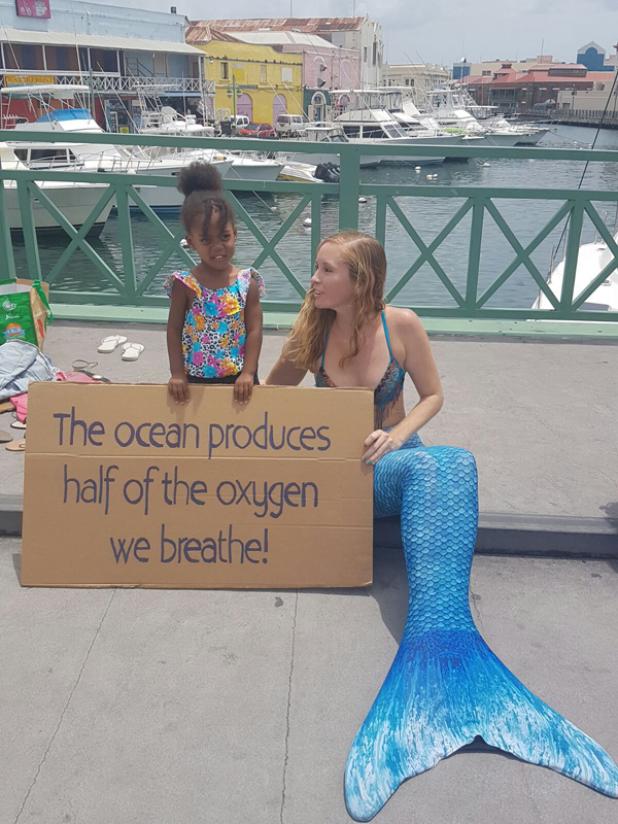 Every second breath you take is produced by the ocean.

Ocean Ambassador of Mermaid Barbados and marine biologist, Nikola Simpson shared this information with the public during her awareness campaign on World Oceans Day in Bridgetown on Thursday. Simpson along with seven of her female colleagues sat on the Chamberlain Bridge to sensitise locals and visitors about the importance of protecting the oceans, major threats to the oceans with a focus on plastic pollution and what they can do to help.

The women who wore their mermaid costumes sat in the middle of the Swing Bridge with placards which read, “Healthy Oceans, Healthy Planet” and “By 2050, if nothing changes there will be more plastic than fish in the oceans”. A fact which is all too real as people who pass by can see a few small pieces of styrofoam and plastic materials floating in the waterways under the bridge.

Simpson speaking to The Barbados Advocate said the aim of Thursday’s activity is to celebrate the oceans and also encourage people to protect the oceans.

“Mermaid Barbados, as mermaids we act as ocean Ambassadors and we try and do what we can to protect our home, where we live. The oceans are so important to us...every second breath that you take you have to thank marine plants in the sea....Unfortunately our oceans are facing many, many threats and [one] of them is plastic pollution. So part of a national campaign in Barbados to reduce plastics has been implemented recently ... starting off with this 15 cent per bag fee at various retailers around the island. So we are encouraging people to skip the straw, use reusable bags, stainless steel bottles, cut down on the amount of plastic that we use in Barbados,” said Simpson.

According to the marine biologist, other threats affecting the ocean include overfishing, coastal development and climate change.

On Thursday evening, Simpson was expected to host a screening of the documentary, “A Plastic Ocean” for World Oceans Day at 6:30 p.m. at the Bellairs Research Institute in Folkestone, St.James. Simpson in addition to being a marine biologist and Mermaid Barbados Ambassador, is the Director of Slow Food Barbados and Slow Fish Barbados which advocates good food – a fresh and flavoursome seasonal diet that satisfies the senses and is part of our local culture; clean food – food production and consumption that does not harm the environment, animal welfare or our health; fair food – accessible prices for consumers and fair conditions and pay for small-scale producers.