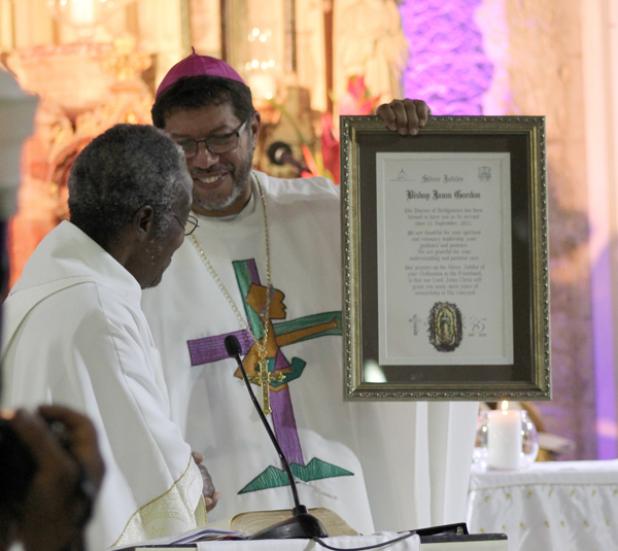 Sat, 03/19/2016 - 10:14pm
By:
Marsha Gittens
DON'T be afraid to stand up and protect the church if need be.
Such was the advice given by Chief Celebrant, Archbishop, Joseph Harris to Bishop Charles Jason Gordon during Friday’s Anniversary Mass at the St. Patrick’s Roman Catholic Cathedral. On this occasion the Diocese of Bridgetown congratulated Bishop Gordon on his 25th anniversary of priestly ordination.
Though stating “up to now, thanks be to God, in the Caribbean protecting the church doesn’t mean that somebody is going to line you up against a wall and shoot you,” the Archbishop said there are still many ways the church has to be protected at present. He encouraged Bishop Gordon to let it always be said “our Bishop protected the church.”
“Never be afraid my brother of speaking truth to all. Never be afraid of standing in front of your church stretched out, blocking any harm, any danger, all those that want to ravage the church of Almighty God. But that will happen only when and only if you have built and developed that strong faith and that deep abiding love for the Lord who has called us.”
Archbishop Harris also challenged Bishop Gordon to be remembered as a man of honour, a man who like St. Joseph did his duty without fail, a man of truth and one “who loved us as Christ loved us.” He also urged Catholics across the island to lift up their Bishop in pray. He particularly instructed them to pray that God gave him the tools and the wherewithal to reject any temptations he may face. Also, that God would assist him to be a man of deep faith and tremendous trust.
Meanwhile, making the point during the Homily that “behind every good man, there is a strong woman”, Archbishop Harris told Bishop Gordon to let Mary be the one who accompanies him daily.
“You too have to have a strong woman but the strong woman is Mary, nobody else. Let Mary be the one who accompanies you at every moment of your life… We do not remember our priesthood has been placed under the protection of Mary. Let us take that seriously, let Mary be the one who accompanies at all times.”
During Friday night’s service, tokens of appreciation were presented to Bishop Gordon. A tribute in song was also rendered by Father Clement Paul. In his remarks, Bishop Gordon thanked his mother and sister for attending the service and for their support. He also thanked all who supported and assisted him along the way as well as stated that all the dreams he had paled in comparison to what God has been able to accomplish in and through his life.