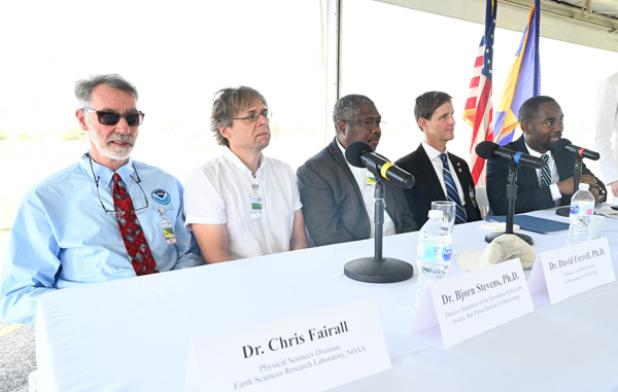 The US National Oceanic and Atmospheric Administration’s (NOAA) Atlantic Tradewind Ocean Atmosphere Mesoscale Interaction Campaign (ATOMIC), will be a an extremely beneficial project.

Speaking during a ceremony that took place at the Grantley Adams International Airport on Saturday, US Ambassador to Barbados, Linda Taglialatela expressed that the research done by the ATOMIC campaign will help the Caribbean people better prepare for natural disasters and potentially save hundreds of thousands of lives each hurricane season.

“The goal of ATOMIC is to investigate how the ocean and atmosphere work together to create the weather and climate we live in,” she said.

“During January and February, this NOAA-led effort will deploy scientific instruments from the NOAA Ship Ronald H. Brown, research aircraft and unmanned aerial vehicles to gather observations that will improve weather and climate prediction to support weather ready and climate smart countries.”

Minister of Maritime Affairs and the Blue Economy, Kirk Humphrey believes that this collaboration with NOAA will be transformative and made the call to have more Barbadians on board so that they are also able to benefit from this experience.

The Minister noted that at the start of this partnership they did not have the capacity yet to fully understand these hurricanes and storms and recalled that as these storms and hurricanes got closer to the US, the information received was more precise.

As such, it is the Minister’s hope that through this partnership with NOAA, Barbados would be able to receive accurate data and so that we would be in a better position to to make the necessary decisions to protect the citizens of Barbados, and by extension the wider Caribbean.

The project will run for six weeks and will take place on and around Barbados with Barbados, Europe and other partners in an area with air-sea processes that strongly influence many weather and climate patterns that have regional and far reaching impacts.

Principal of the Caribbean Institute for Meteorology and Hydrology, Dr. David Farrell, revealed that students of the CIMH will also be interning and assisting with the project.