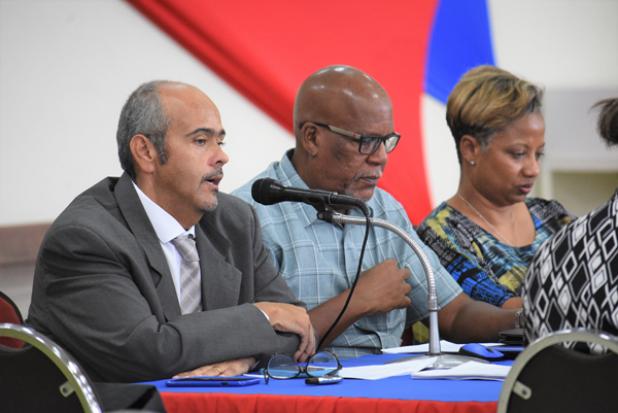 Minister of Transport, Works and Maintenance, Dr. William Duguid (left); alongside Chairman of the Transport Authority, Ian Estwick, during a meeting which was held yesterday at Solidarity House.

Progress made in Transport Meeting

Plans for the Transport Augmentation Programme (TAP) are pushing ahead.

Yesterday, Public Service Vehicle (PSV) owners were able to get a closer look at the contract which would see them partnering with the Transport Board to boost the bus service in under-served districts across the island.

Minister of Transport, Works and Maintenance, Dr. William Duguid, who chaired that meeting which lasted over four hours at the Barbados Workers’ Union (BWU) Solidarity House, told reporters, “We met with some of the PSV providers to try to get our contract accepted – working through the draft to be able to start to implement our Transport Augmentation Programme.

“They will have subsequent drafts and meetings to thrash out finally that contract that we would be able to use going forward with respect to the programme,” he stated.

Public Relations Officer of the Alliance Owners of Public Transport, Mark Haynes, pointed out that attorney-at-law Laticia Bourne was on hand as they perused the draft
document.

“We are determined to work with government to ensure that Barbados' commuters do not suffer any longer,” he stressed, adding “Right now it has been characterised as a national crisis, it is unfortunate it has reached this stage…Right now the sector moves some 80 percent of the nations commuters so its a question of working together, and having level heads and once we are thinking things through from a national perspective, I do not see any reason why we cannot go forward with this programme”.

Meeting with Transport Board
Also, while at Solidarity House, Minister Duguid met with the Board of Directors of the Transport Board and BWU Executives for another lengthy meeting which he described as “cordial”.

“I think all in attendance learnt something and we are starting to map out a way forward for the Transport Board and collaboration with and in full dialogue with the Barbados Workers Union,” he revealed.

“We have to return, bring some more information to the table and they will take the information to their workers and then we will be able to chart a way forward. So, we are making progress but we still have some work to do. At the end of the day we want a win-win situation, but most importantly we want that the commuters benefit – get to work, school and play in a good and timely fashion,” the Minister added.