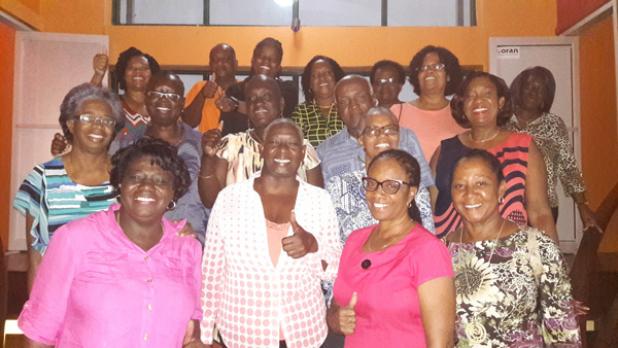 Some of the Principals that viewed the docudrama.

Sun, 01/15/2017 - 12:00am
By:
Cara L Foster
Around 30 principals were afforded the opportunity to view Step by Step’s recent movie, “Barrow: Freedom Fighter” and the feedback was incredible.
Partnering with “The Power of Choice”, Step By Step Productions invited Principals of the Barbados Association of Principals of Public Secondary Schools (BAPPSS) and the Association of Public Primary School Principals (APPSP) for a special viewing of their recent docudrama which focuses on the life of the late Rt. Excellent Errol Walton Barrow on Monday evening at the Olympus Theatre.
Errol Griffith told The Barbados Advocate that it was the hope of The Power of Choice and Step by Step Productions that the Principals would see the value of booking as many students as possible to view the film, and to see that the film would exceed expectations, as well as to be noticed as one that is considered to be educational and entertaining.
Marcia Weekes, the executive director and script writer and Dave Weekes, the producer, began the evening by sharing their incredible journey in film; highlighting that after eight years with very little financial backing and no experience at all, they have produced six, full-length movies.
Griffith said that following the screening of the film, the responses and feedback from the Principals were described as excellent and encouraging. Most of the Principals shared that the film taught them things about Barrow’s life that they had not known
previously.
Joseph Maynard, the Principal of the St. Leonard’s Boys School and former teacher of history at Harrison College, commented that he found the docudrama to be one that is historically correct.
The Principals all expressed that they were keen to have their students view the docudrama on the life of the Rt. Excellent Errol Barrow, Barbados’ "Father of Independence.”
President of the BAPPSS, Vere Parris, of the Combermere Secondary School and President of the APPSP, Marielon Gamble, of Bay Primary School, both agreed that the film was something that students could learn from.