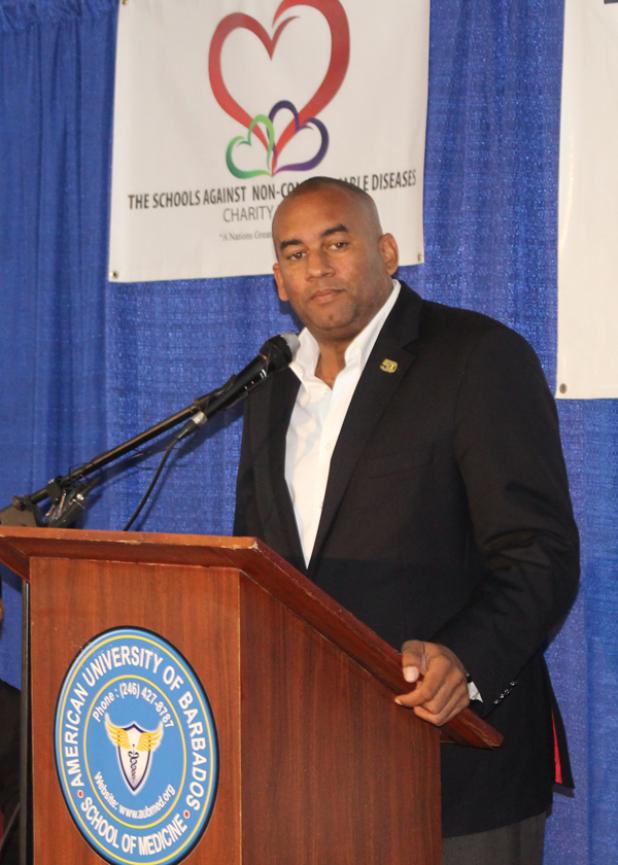 Minister of Tourism and International Transport, Richard Sealy, as he delivered an address during the launch.

To better tackle non-communicable diseases (NCDs), the process of prevention must commence in the formative years.

This is according to Minister of Tourism and International Transport, Richard Sealy, as he delivered an address during the launch of the Schools Against Non-Communicable Diseases Charity Fun Walk and Health Fair, which was held this week at the new campus of the American University of Barbados (AUB) – School of Medicine in Wildey, St. Michael.

Issuing a reminder that chronic non-communicable diseases are preventable in large measure, Minister Sealy stated, “That process of prevention of necessity has to start during your formative years. You can’t talk about starting prevention when you are turning fifty. You have to start when you are young.

“Therefore, this effort is completely appropriate and should be saluted. It is the school children themselves, the young people that are leading this initiative and I think that augurs extremely well for us to see how some of our young people are thinking,” he further commented.

“This is not only a health issue, this is a national issue. This is a developmental issue. The incidence of non-communicable diseases in Barbados is way too high,” the Minister stressed.

Sealy pointed out that there are some “very unflattering labels” being given to Barbados, which is seen as the amputee capital of the world due to the high incidence of diabetes. He also made mention of the “unflattering statistics about obesity in young people”, as well as the fact that there is an entire ward at the Queen Elizabeth Hospital dubbed the Cancer Ward. As such, he stressed that there is some work to be done in combating NCDs.

Co-ordinator of the initiative, Ashley Lashley of the Lodge School meanwhile told the Barbados Advocate that she felt the need to pool youth together to tackle the issue of a high incidence of NCDS in Barbados and across the region and hence the launch, which saw students from primary, secondary and tertiary schools coming together to lead in the fight. She also expressed gratitude to the AUB for partnering on the initiative.

She meanwhile made a call to governments across the region, starting with Barbados, to work harder to significantly reduce the high levels of sugar found in beverages. Also, to introduce a permanent subject on the school curriculum that places greater focus on living a healthy lifestyle, with heavy emphasis on sports and nutrition, two essential components in helping to combat NCDs. This latter call was later endorsed by Minister Sealy.

The Schools Against Non-communicable Diseases Charity Fun Walk, which is being hosted in conjunction with the American University of Barbados (AUB), is scheduled to take place on July 4th, starting at the Barbados Community College from 9:30 a.m. and ending at the AUB with the Health Fair.