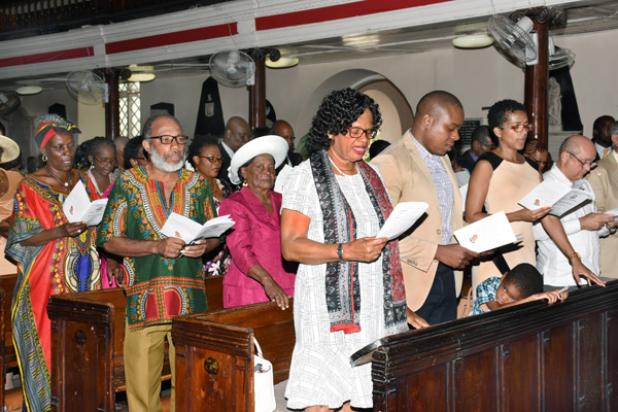 THE National Union of Public Workers (NUPW) is preparing to press for a salary increase for its members and public workers.

Word of this comes from President Akanni McDowall, as he made it clear that the Union’s Executive is not agitating for this pay raise because they are troublemakers or because they do not love their country.

“We are stakeholders in nation building,” he told the congregation of the Cathedral Church of St. Michael and All Angels, yesterday.

“If the Government of Barbados signals to us that our country is in difficult times and we have to hold strain, we the Union will hold strain. It is our national duty to so do. However, when the Government signals, by removing the hold of strain, that we are again in a position to do more, then the Union will return to its primary mandate of ensuring that our workers are not taken for granted,” he said.

McDowall, addressing NUPW’s Annual Church Service to mark the beginning of Public Workers’ Week 2017, said that for the last 73 years, that institution has worked to ensure that the people who clean this country, who secure the borders and those who provide the technical and administrative assistance to facilitate this 166-square mile paradise, can empower their own lives.

He went on to observe that sometimes caring for the workers of Barbados has been an easy task, and at other times, it has caused upset between his Union and other stakeholders in the country.

“However, it is healthy for us to remember that whenever there are differences among us, it’s not only until the government, the union, capital and all other stakeholders are in the most unanimous position to create a sustainable and well-run society, for all of us to benefit.”

The NUPW President further stressed that the primary aim of the union is to ensure that the workers of Barbados, particularly those in the public service of the country, are given their due pay, their due respect and a sanitary and safe working environment.

In exchange for those dues, McDowall is encouraging workers to continue the strong tradition of hard work and going above and beyond the call of duty to ensure that Barbados continues to do well. (TL)