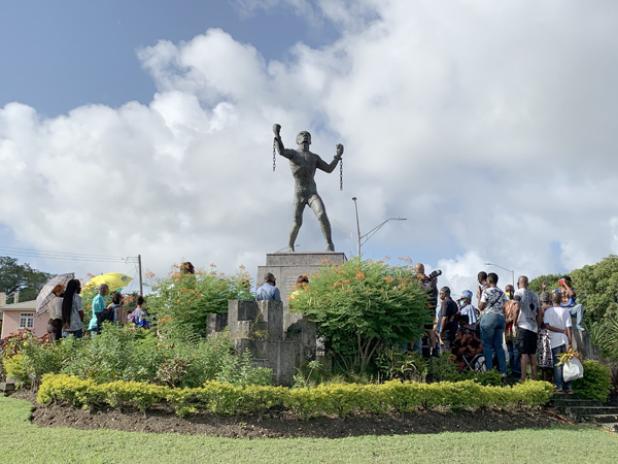 The imposing figure of National Hero The Right Excellent Bussa, also known as the Emancipation statue, where the annual celebration to mark Emancipation Day event was held yesterday.

Prescod: I have done nothing wrong!

“WHEREVER I go, BLP, DLP I will always be the servant of the people of Barbados.”

Passionate words from Member of Parliament for St. Michael East, Trevor Prescod, which left many people wondering about his political future during Emancipation Day celebrations held yesterday morning at the Emancipation statue, commonly known as the Bussa statue.

Prescod gave the moderate crowd in attendance a clear indication that he was not happy with the recent decision to remove him from the helm of the Ministry of Environment and National Beautification, stating that he had done nothing wrong.

In a recent Cabinet reshuffle, Prescod found himself without a Ministry and suggested that this was done even though he has given his all to the Party, even in ill-health and with proven results under his belt.

He said there were rumours circulating about his current state of mind. “I believe that you have heard in recent times that Trevor Prescod is ill. That Trevor Prescod is too old. In a black country where we speak of elders because we adopt and accept the African model of the idea of a senior man and woman, especially when you are searching for wisdom. A sober individual with a life experience. And where every challenge arises, they perform healing rites. They resolve conflict.

“Three years ago when I was at the door of death, I tried to demonstrate to the Barbadian people at the 11th hour, when I had given up, that I would stay in the fight, even though I had no energy to stay in the fight. I had colon cancer. I had one of the most severe operations. My friends came and when they saw me I was a skeleton with a thin layer of flesh in QEH. I had to learn to walk again.

“You believe that that man, who they are now saying is dead, who they are now saying that I am posting things on Facebook… I have not gone on Facebook for a long, long time. But they say I am posting things on Facebook that I want to commit suicide. If I could live forever to do the work that allows me to be rec-ognised as equals in this society and everywhere, where black people live I would stay alive forever, even if I had to suffer the consequence of sickness,” he stated.

It is against this backdrop that he said he cannot do it without his constituents. “I can only survive with you... It is the people who stood with me before that I ask to stay with me now. I have not done anything wrong in this country to deserve the treatment.

“Trevor Prescod never stole a toffee from the State. Do you believe that I look so outdated that I cannot contribute to the development of Barbados when I see men much younger and women much younger than me that can’t get up those stairs serving at the highest level,” he exhorted.

Saying that he has more to get off his chest, he said yesterday’s event was not the time. “I came out this morning because I had no choice. Because I didn’t want the interpretations to go around that I am in such a state of despondency that I can’t even get out of my bed and I am turning senile and I am concentrating on committing suicide.”

Prescod said there is a larger discussion to be had on the type of economic enfranchisement that is being created in the country. He said that the current global struggle is not about any nationality, rather race, social class and stratification. “It is about a number of social variables in this society that people want us to accept as best practices.

“I am no racist. I know what justice is. I know what fairness is. I know what loyalty is. I know what commitment is. I have been grounded in those virtues in life, I am not breaching them in my judgement. I might be wrong, but I would never breach the virtues that are important to the stabilisation of the modern world,” he said. (JH)