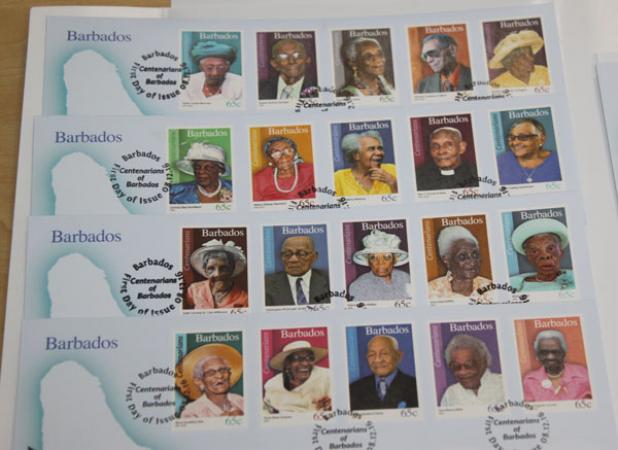 The images of the 20 centenarians who are featured on stamps.

Tue, 12/13/2016 - 12:00am
By:
Marsha Gittens
THE Barbados Postal Service has paid tribute to citizens of Barbados who reached the milestone of 100 years through its stamp issue, Centenarians of Barbados.
According to Manager of the Philatelic Bureau at the General Post Office, Deborah Small, this issue was released on December 8 and to date that agency has received “a steady stream of queries and customers coming in to buy”.
She pointed out that the issue features 27 centenarians, some who have died and others who are still alive. Those selected were drawn from each parish, have different backgrounds and worked in different professions.
Twenty of the persons featured are 100 years old, while the seven remaining fall into the category of super and semi-super centenarians. The former is a person who is 110 years or older. Meanwhile, a semi-super centenarian is between 105 and 109 years old. Two of the centenarians to be found on the stamps are: the late James Sisnett, who died at 113 years and the late Emily Clarke, who died at 110 years old.
“For this year 2016, we would have worked on two important issues – the 50th Anniversary of Independence and the Centenarians of Barbados; and we linked those issues together because 50 years is a very important milestone for the country. Our centenarians would have lived 50-plus years … and we thought this Jubilee year, when we were paying tribute to Barbados, we would have paid tribute to these men and women who would have worked so hard as the country developed over the past 50 years. So that was the reason for the Centenarians of Barbados issue,” said Small.
She further stated, “I wish we could have featured more but for this issue, we call it an iconic stamp issue because a [commemorative] stamp issue does not normally carry so many stamps, but commemorating an area such as this one is very important and so while we would have liked to feature more, I think 27 is a pretty impressive number.”
Small explained that the stamps can be purchased by members of the public from post offices islandwide. They will be available for the next three months there. However, at the Philatelic Bureau at the General Post Office, the stamps will be available for a period of one year.
“The stamps are very affordable, because these are all local people, and because we know that the friends and relatives are going to be so excited and everybody wants to be able to acquire one, we used the local postage rate of 65 cents. That is not to say that they cannot be used on postage going abroad.
“Depending on the cost of whatever you are mailing, you can purchase more than one so that you add up the postage that you need for your particular package.”