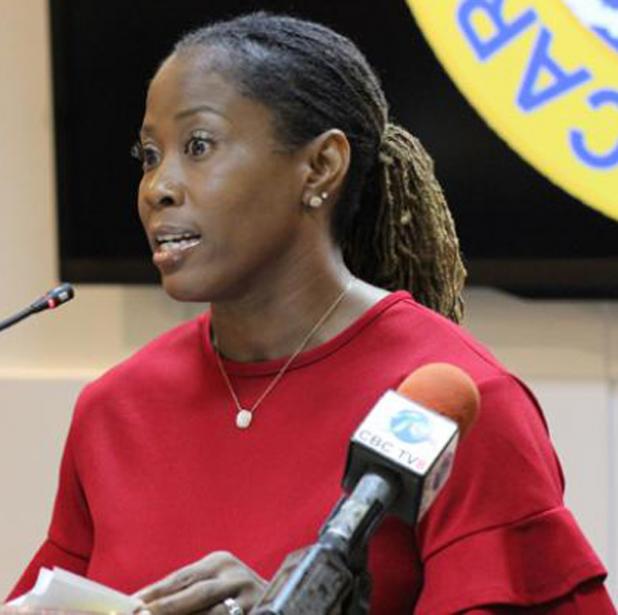 Coordinator of the MSME Unit at the CDB, Lisa Harding.

There could soon be a programme in place to provide grant funding to Micro, Small and Medium Enterprises (MSMEs) in the Caribbean.
Word of this has come from Lisa Harding, Coordinator of the MSME Unit of the Caribbean Development Bank (CDB). Speaking during a recent webinar to mark MSME Day, Harding said that the proposed COVID-19 MSME Response Programme, to be carried out by the CDB in conjunction with Caribbean Export, had not yet been approved, was at “an advanced stage in terms of appraisal”.

“The components of the project include the development of a joint grant facility modelled after the DAGS [Direct Assistance Grant Scheme] Programme. The beauty of this is that it would not be a reimbursable grant given the cash flow constraints and the working capital limitations that MSMEs would have at this time and it also incorporates online training and of course a communications component of the programme,” she said.

According to Harding, they believe that such a programme would go a long way in supporting much needed technical assistance and capacity building reforms for MSMEs in the region. Her comments came as she said they are working assiduously to expedite the approval process to get the funding to the sector as soon as possible.

She told those tuned into the webinar that the CDB, has recently finalised a partnership agreement with the Organisation of American States (OAS) to also assist MSMEs. She indicated that the CDB and OAS have identified three areas where they can assist – e-commerce, training and capacity building and business climate reforms. In respect of e-commerce, she said while it is an issue that has been difficult to address over the years, they believe given the thrust to go digital as a result of the pandemic, they may be better poised now to make it a reality.

Her comments came as she said that in light of the crisis, the Bank recognises that as a developmental institution it must pivot and be responsive. As such, she indicated that CDB is looking at variation in the terms and conditions of their lines of credit to facilitate financing and working capital.

“This was not the case in the past, working capital was only facilitated for start-up businesses, but we recognised that this is an important aspect of the survival of MSME and therefore this is what are going to our board shortly with,” she stated.

Additionally, she said CDB’s has reallocated some of the resources from the Cultural and Creative Industries Innovation Fund, which provides capacity building support to creative entrepreneurs.

“We have also found and it is widely known that the impact of covid has more or less decimated the creative industries sector primarily because our creatives, the businesses were physical in nature, a lot of it based on contact and gathering and therefore with the advent of the social distancing protocols that subsector was severely hit,” she noted.

As such, she said they have reallocated some of the Fund’s budgetary resources to provide emergency relief grants for creatives in the music and festival subsectors. She said they were able to achieve that quite quickly with the support of the Fund’s steering committee. Harding revealed that with the round of evaluations already completed, they should soon be in a position to start the disbursement of the grants. (JRT)