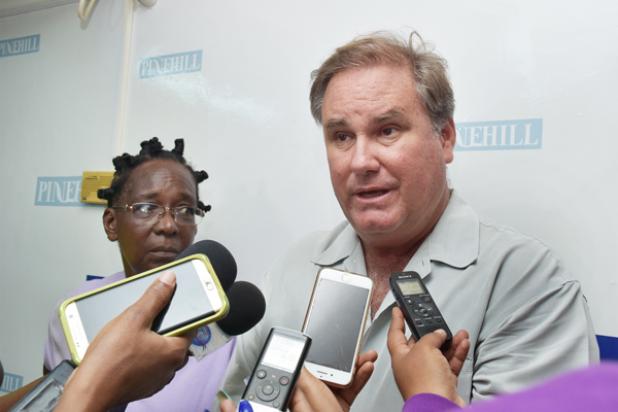 President of the Barbados Beef and Dairy Producers Association Annette Beckett and Vice President Brian Allan as they spoke to the media following a tour of Pine Hill Dairy on Wednesday.

OVER a six-year period the number of dairy farmers has dropped from 39 to 16.

This was revealed by President of the Barbados Beef and Dairy Producers Association Annette Beckett and Vice President Brian Allan as they spoke to the media following a tour of Pine Hill Dairy with Minister of Agriculture Indar Weir on Wednesday.

They were at the time giving some insight into the challenges facing the dairy farmers and what they are hoping can be done to ease some of the pressure from the sector.

They explained that high water bills, low rainfall and no price increase over the past eight years are some of the problems facing the industry. Noting that dairy farmers work closely together, they explained that farms have been able to maintain production levels even though some players have left, but noted it has not been easy.

They stated that they have been applying for an increase in price since last year. “The dairy farmers are in a funny position because we are probably one of the only businesses in Barbados who cannot put up our prices; we have to go through Pine Hill Dairy not so much the Ministry anymore. So all other inputs are going up and we cannot put up our prices,” Beckett said.

The industry leaders who have over five decades of combined experience explained that the increase in water bills has been challenging particularly since one cow drinks 30 to 33 gallons of water per day.
According to Allan, “There are water bills out there on dairy farms over $5 000 and for an industry that has not had a price increase and those bills would have gone from $1 500 to $5 000 in the last year. For any business that has not made money; just surviving – to add these extra bills is a difficult situation.”

While farmers employ water harvesting techniques, Beckett explained that the drought is having a severe impact on the forage which is eaten by the cows. She said this also has an impact on milk production and the solids produced.

Allan believes there that there has been a definite decrease in volume as a result of a lack of forage. “That combined with the increased water prices. Increased water prices have us in a very tenuous situation... finances – because you have to use more feed, more concentrate to make up for the lack of forage. You are getting quality deductions because of lower quality milk and then on top of that you have huge water bills so it is really a perfect storm for the dairy farmers at the moment,” he lamented.

As it relates to the review on the cess on milk legislation, it was noted that this has been ongoing for the past four years. Allan believes that this could take some months before seeing changes.

“The whole theory of the cess is that is that some of the imports, I don’t suppose the milk alternates would want to hear this, but they would pay a cess, which will go towards paying something towards the farmers. So the farmers could reduce the price to Pine Hill Dairy.”

“So basically the Pine Hill Dairy’s milk should go down to the local consumers but I expect that the alternates would go up slightly, but you have to remember that all foreign exchange for all those milk alternatives is going out of the island. This is not new this is done by many countries to support their agricultural industries,” he said. (JH)