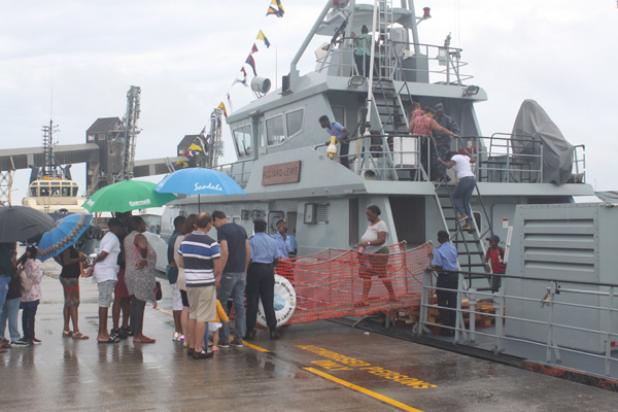 With umbrellas in hand, members of the public waited in line for their turn to board the Barbados Coast Guard vessel. 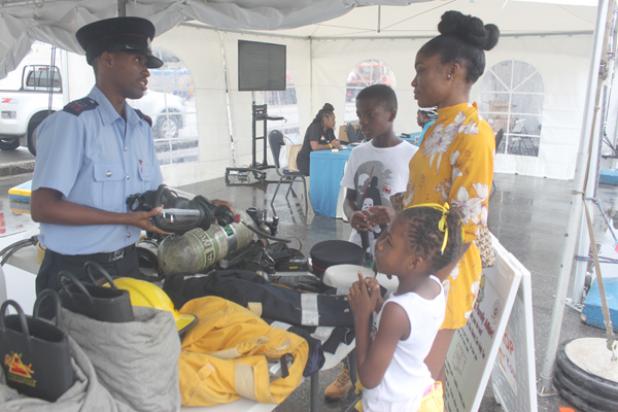 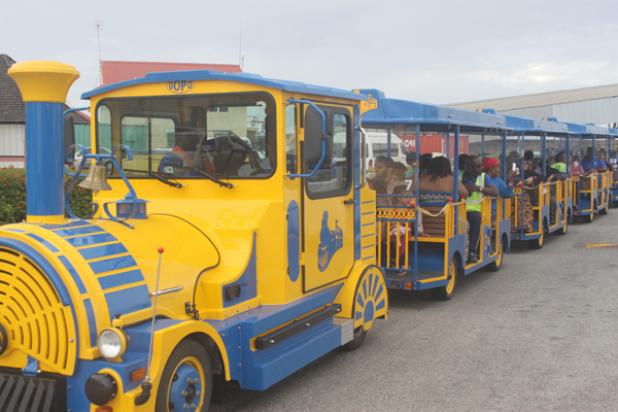 One of the highlights of the Open Day was the tram rides. While onboard, individuals learnt more about the Port’s daily operations and the equipment used.

Barbadians got firsthand knowledge of what occurs at the Bridgetown Port yesterday when they braved heavy rains to attend the Port’s Open Day.

One of the activities conducted as part of the inaugural Blue Fest 2019, it attracted both the young and old to this venue.

One of the highlights for many was the tram ride around the facility. While onboard, tour guides pointed out the terminals and sections of the Port while explaining what activities occurred there. The different types of large equipment used daily within the Port was also pinpointed.

The Open Day also gave patrons a chance to go onboard a Barbados Coast Guard vessel and a tug ship. Individuals also visited booths manned by personnel from the Barbados Fire Service Department where they learnt about equipment used for rescues at sea. At the booth manned by the Barbados Port Inc.’s security, persons learnt about the equipment used to keep this island’s waters safe.

Speaking to The Barbados Advocate, Chief Executive Officer of Barbados Port Inc., David Jean-Marie, said he was pleased to see the number of people who attended though it was a rainy day.

Meanwhile, Chairman of Barbados Port Inc., Senator Lisa Cummins, stated one of the aims of the event was to raise the public’s awareness about the daily operations at the Port. She expressed hopes that from the initiative, Barbadians have a greater understanding of “what a significant undertaking the Bridgetown Port really is”.

“Sometimes when you come down and you see just a small aspect. [However,] we are willing to open up this large space to you so you can understand what we do, how we do it, why we do it and which services that we are providing and to who.”

She added that the public being more educated about the role played by this island’s major seaport “is really a big deal”, because through awareness “people understand that it is not just my small perspective but it is much bigger, it is national, it has a direct contribution to make to the wider economy and it also has a direct contribution to make as it relates to the tourism sector”. (MG)