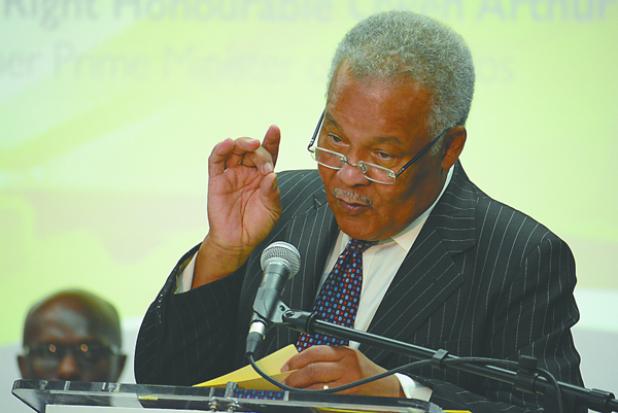 THE funds to be provided under the proposed Extended Fund Facility (EFF) of the International Monetary Fund (IMF) will not be enough to solve the country’s Balance of Payment (BOP) problems.

This is the opinion of former Prime Minister of Barbados, the Rt Hon Owen Arthur, who said while he does not want to speculate on the terms of the Fund, what is known is that in order to stabilise foreign reserves to accepted levels, Barbados has to increase its reserves by approximately $600 million.

The former Minister of Finance was at the time delivering an hour-long presentation in a packed LT1 of the Roy Marshall Complex on Monday night, during a public lecture hosted by the University of the West Indies entitled, The IMF and the Caribbean: New Directions for a New Relationship.

During a recent press briefing, head of the IMF Barbados delegation Dr. Bert Van Selm stated that a staff level agreement has been reached, which would amount to US$290 million to be distributed to government in eight tranches over the next four years. When approved by the IMF Board, it is expected that $US49 million will immediately be made available to the Barbados government.

While crunching some of the numbers, Arthur told the large audience that in order for Barbados to reduce its debt to GDP ratio overhang which now stands at over 170 per cent of GDP to 60 per cent over a planned period, a very large fiscal effort reflecting a primary surplus that is at least twice more than the three percent primary surplus recorded annually between 1994 and 2008 will have to be realised over a sustained basis over a long period.

“To undertake a fiscal adjustment to realise such a primary surplus while also having to use fiscal policies to improve its foreign exchange reserves may prove to be a most difficult undertaking for Barbados.”

The economist also pointed out that there are success stories in the region of countries that went under an IMF programme, notably Jamaica and Grenada. He also conceded that the IMF is seeking to be more inclusive and less heavy-handed as perceived in the past, opting for more home-grown programmes, while not leaving the poor and vulnerable by the wayside. However, Arthur issued a warning that it will not be smooth sailing under an IMF programme.

He also explained that a country’s access to IMF financing is based largely on its quota in the Fund, which in turn reflects the proportion of global trade for which it accounts.

“A small country can have a big financial problem. It will however receive funding from the IMF based on its quota rather than its needs. Reliance on IMF funding alone and meeting all the IMF tests can therefore still leave it in peril, he stated, noting that this is a lesson learned by Dominica at the turn of the century, which essentially had to be bailed out by Barbados and Trinidad.

The former Prime Minister explained that from its very inception and up to the present, the implementation of IMF Programme has always entailed access to financing on the one hand and the requirement on the part of the country to carry out policy and structural adjustments to correct imbalances and disorder in a country’s performance on the other.

“The balance between the two and where the line is drawn are important considerations that will fundamentally affect the outturn.”

Arthur told the audience that Barbados’ issue is not just how to manage reserves and debt. “Our problem will be how to turn a society where the economy is hardly viable. And the great challenge is now to be to rebalance the relationship between social system and the economic system, because Barbados has reached its stage where the social system is too large for the economy to carry because of the loss of international business and the problems that have ensued in manufacturing and agriculture,” he opined.

He also suggested that it will be highly unlikely that the IMF will disregard its own recommendations made in the December 2017 Special Report by its own technical team on the reform of operations of state-owned enterprises. “…It is even more unlikely that it will be prepared to be guided only by the submissions that the people have been invited recently to submit to Government on the matter,” he said.(JH)