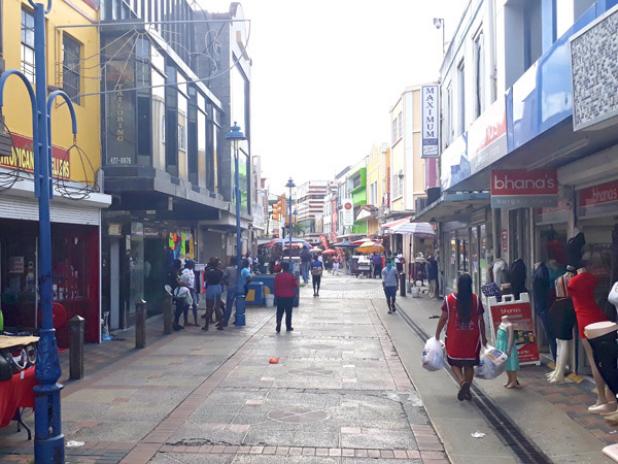 Swan Street was a far cry from its usual numbers. 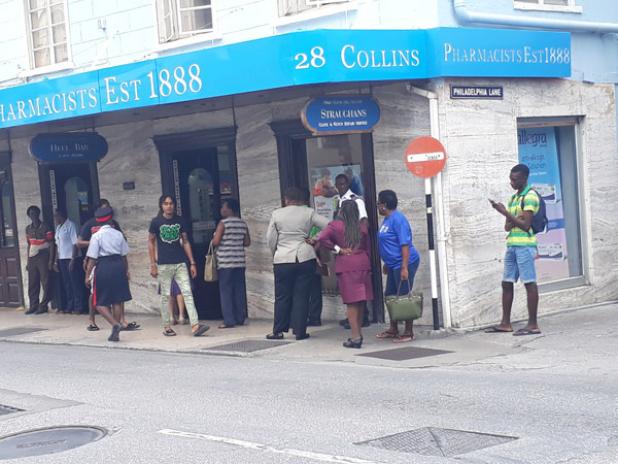 Collins Pharmacy on Broad Street was one of the businesses limiting customers in the store.

NOT BUSINESS AS USUAL

AT first glance, it looked as though it might have been business as usual in Bridgetown yesterday, however, on closer inspection, it was evident that the effects of the COVID-19 pandemic were being felt. With the national response being ramped up to Stage 2 over the weekend after the announcement of a new tally of 17 confirmed cases, there remains mixed views about the severity of the situation.

Heading into Bridgetown just after midday yesterday, the amount of vehicular and pedestrian traffic on the roads would give no clear indication that there was a global pandemic affecting the island. Similarly, if the amount of public service vehicles in the Constitution River Terminal were anything to go by, one would believe that there was absolutely nothing afoot in Barbados.

The true tale was told in the City as the stores would beg to differ. Cave Shepherd remains a reliable marker of activity in Bridgetown over the years and shoppers were almost non-existent. It was only bare necessities as patrons attempted to pay their monthly bills at SurePay while many sales representatives were without customers to assist. The story was the same for many of the stores on Broad Street and Swan Street as they were all sparse by comparison for a Monday at the end of the month.

That was not the case for everyone as financial institutions, pharmacies and other stores which sold essentials such as groceries were being patronised. Items such as alcohol, sanitiser, antibacterial wipes and medications were in high demand as customers were required to queue outside before being admitted into the high-traffic businesses to control numbers.

Just outside Bridgetown saw a similar story being told as supermarkets and pharmacies in Black Rock adopted the same practices to keep the numbers of persons congregated as low as possible. (MP)