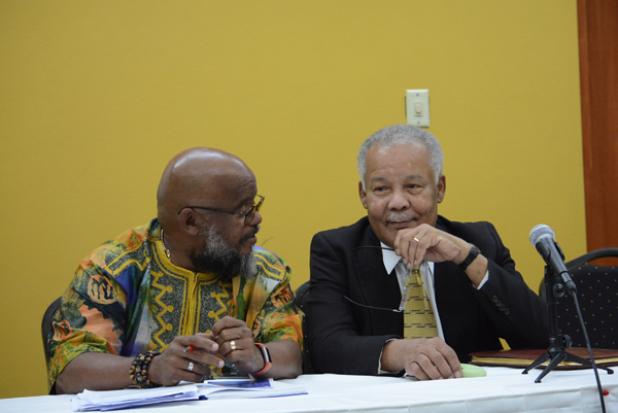 Professor Owen Arthur (right) having a discussion with Neil Paul, Director of the Shridath Ramphal Centre, during a lecture entitled ‘Brexit and and the New Caribbean Trade Agenda’ at the Sagicor Cave Hill School of Business.

NO BENEFITS FROM BREXIT

BARBADOS and the Caribbean should not expect any benefits flowing their way once the UK leaves the European Union.

Former Prime Minister, Professor Owen Arthur said so on Tuesday nght in a lecture at the University of the West Indies, Cave Hill.

The deadline for the UK leaving the EU was originally set for March 31. However, with a lot of uncertainties surrounding the exit, the departure has been delayed by three months.

The lecture was titled, “Brexit and and the New Caribbean Trade Agenda”. It was sponsored by the Shridath Ramphal Centre (SRC) and took place at the Sagicor Cave Hill School of Business.

Professor Arthur also drew on how the Caribbean has performed in terms of trade with both the UK and the EU, especially following the completion of the Economic Partnership Agreement.

Arthur, who is Professor of Practice at the UWI, said that the UK thinks that having quit the EU it will be able to pursue independent and commercial ties that will cause it to forge new relationships with powerful economies in a way that is not now possible under its current membership with Europe.

If that is the logic behind Brexit, the Professor stated then that the Caribbean will hardly occupy any special place on the UK’s trade agenda radar once it leaves the EU.

He suggested that after Brexit the Caribbean should look to amend the Most Favoured Nation (MFN) clause that now exists in the CARIFORUM Economic Partnership Agreement (EPA) with Europe.

Professor Arthur, who was Barbados’ Prime Minister when the EPA was concluded in December 2007, explained that the EU is to grant African, Caribbean and Pacific (ACP) countries any more favourable treatment than that region grants to third parties.

However, the ACP will have only to extend to the EU any more favourable treatment given to a major trading partner in a free trade agreement.

Arthur also said that since the conclusion of the EPA, exports from Barbados Caribbean countries to both the UK and the EU have declined.

He told the audience that the value of UK imports from Barbados and Caribbean has fallen from 662 million pound sterling in 2008 to 449 million pounds in 2017. As for trade with the Europe, the EU exports to the Caribbean have increased from 1.5 billion euros in 2008 to 1.6 billion in 2017.

He said that only the Dominican Republic has taken advantage of the generous market access with Europe, unlike the rest of this region.

He said that the declining export performance has to do with the fact that high volumes of traditional exports of sugar and bananas which dominated that trade, have not been replaced by new manufacuturing exports nor high value added commodities. Compounding this, Professor Arthur went on, “is that Tourism, the region’s biggest service sector does not appear to have realised any significant bounty from the EPA as well".

He pointed out that from available evidence, at least eight countries have recorded a decline in tourism exports trade with the UK.