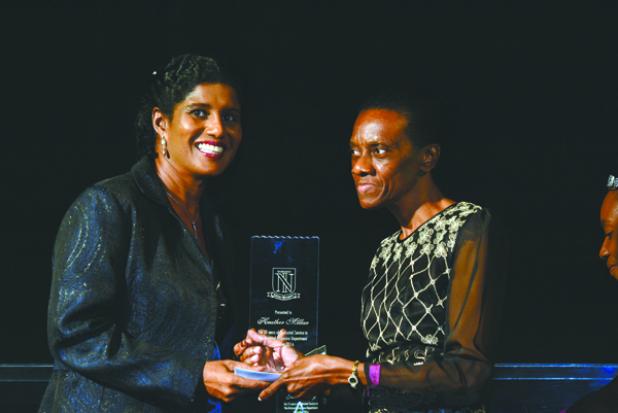 Heather Millar (right) receives her award for 30 years of service to the National Insurance Scheme (NIS) from Minister of Labour, Social Security and Human Resource Development Senator Dr. Esther Byer-Suckoo during a celebration at the Hilton Hotel.

Wed, 12/28/2016 - 12:00am
TOGETHER they have contributed decades of service to the National Insurance Scheme (NIS) of Barbados.
Last Monday night, the commitment of long service and retired staff of the NIS was celebrated during the organisation’s annual Christmas party held at the Hilton Barbados.
Acting NIS Director, Jennifer Hunte, noted that as the year comes to a close, there is an air of excitement as the staff prepares to celebrate the NIS’s 50th anniversary.
“As we reflect on our mandate, the challenges we faced in 2016, and the measures put in place to address them, let us approach 2017 with renewed focus to improve the quality of our service delivery to all customers. I am confident that once we work together, we can achieve the goals we set,” she encouraged.
Minister of Labour, Social Security and Human Resource Development, Senator Dr. Esther Byer-Suckoo, while offering Christmas greetings, also offered words of encouragement, saying the key ingredients needed for 2017 will be faith, hope and love.
The Minister remarked that 2016 was an eventful year, saying the NIS had some achievements and missed some targets.
Acknowledging that the NIS will be celebrating its 50th anniversary next year on the heels of the island’s 50th anniversary of Independence, she recalled that it was an opportunity to review the island’s achievements and to remind the country of its strengths, in the face of great odds.
“It is when we look back and when we remember where we come from, and what we’ve come through, it helps to prepare us for what is ahead. We never know what is ahead. But when we have the opportunity to reflect, we gather our strength so that we can move forward.”
She urged staff to keep pressing on, and to set a target, be it personally, professionally, spiritually or emotionally, to avoid drifting aimlessly.
“For many of us we are not exactly where we wanted to be – but keep plodding on. Forget what is behind. Don’t beat yourself up. After you look back and take stock, leave the past behind. Keep moving forward.”
She also encouraged the staff to set reasonable goals, using the examples of being punctual, giving greater service, being more customer oriented, highly motivated, caring and more reliable as set out in the organisation’s Mission Statement. (JH)