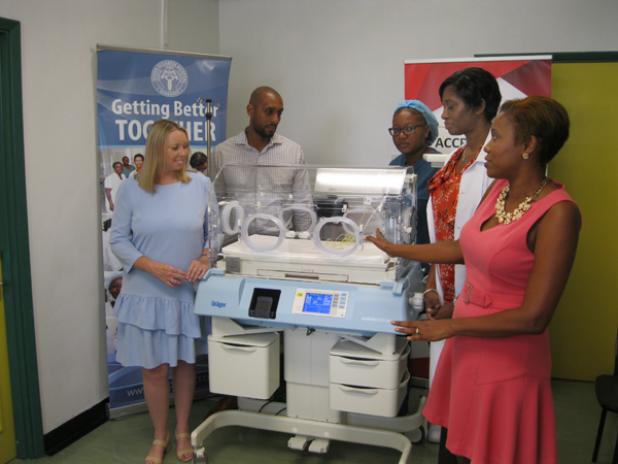 The Queen Elizabeth Hospital (QEH) now has a complement of 16 incubators in its Neonatal Intensive Care Unit (NICU).

This after a new incubator valued at $49 000 was jointly donated to the hospital by St. Nicholas Abbey and Eric Hassell Shipping recently in the NICU Conference Room.

Addressing the proceedings, Newborn Intensive Care Specialist, Dr. Gillian Birchwood said the new addition puts the Unit steps closer to having its full complement of 20 incubators to serve the approximately “500 babies” who yearly are admitted there.

“An incubator is a core and crucial piece of equipment on the Intensive Care Unit… So because of the length of time that babies need to be in the incubators, in order to service those who need to be here for a long period of time as well as those who need to be here for a short period of time, we need about 20 incubators. We presently have a complement of 16 incubators and so whenever we have a generous donation such as has been given to us by St. Nicholas Abbey and by Eric Hassell Shipping, it makes a tremendous difference to the quality of care that we can provide to… the newest citizens of Barbados who need our help at such a crucial time.”

Head of the QEH’s Paediatrics Department, Dr. Angela Jennings, thanked both companies for their kind donation while noting that the incubator has been on their wish list. She further explained that it came before the peak period for the Unit.

“Usually after August, as we hit September onward to December, our numbers in the Neonatal Intensive Care Unit do definitely go up and that is where we feel the greatest burden; that is where we have the sickest babies, the babies who are in need of the greatest care and that is where the stress of juggling the incubators situation becomes more critical. And that is why our aim is to ensure that as we look objectively at our resources and what are needs are, we recognise that our aim is to ensure that we have enough incubators for that time of the year.”

Camilla Warren of St. Nicholas Abbey and Mark Hassell, Director of Sales and Business Development of Eric Hassell Shipping, were both on hand to make the day’s donation. Warren explained that a portion of the money used to purchase the incubator was raised during St. Nicholas Abbey’s Annual Christmas Carols event. She added further funds were given by Eric Hassell Shipping to assist with making the purchase possible.