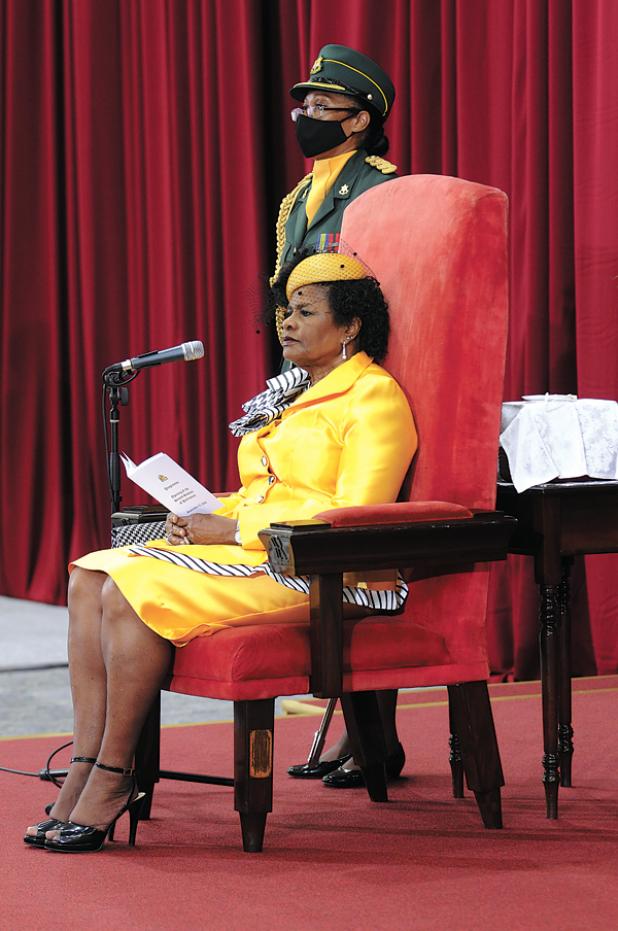 BY the end of next year Barbados is expected to become a republic, removing Her Majesty Queen Elizabeth II as the titular Head of State.

This was revealed by Governor General Her Excellency Dame Sandra Mason as she delivered the Throne Speech from the Senate Chamber in the Frangipani Room at the Lloyd Erskine Sandiford Centre, for the opening of the Second Session of Parliament yesterday morning.

Under the sub-heading of Government and Governance, Dame Sandra Mason alluded to Barbados’ first prime minister, the Right Excellent Errol Walton Barrow, who cautioned against “loitering on colonial premises”.

“That warning is as relevant today as it was in 1966. Having attained independence over half a century ago, our country can be in no doubt about its capacity for self-governance. The time has come to fully leave our colonial past behind. Barbadians want a Barbadian Head of State. This is the ultimate statement of confidence in who we are and what we are capable of achieving. Hence, Barbados will take the next logical step toward full sovereignty and become a Republic by the time we celebrate our 55th Anniversary of Independence.”

According to the country's Constitution, a two-thirds majority in Parliament is needed to authorise the change.

The decision to become a republic has been mooted by previous Prime Ministers, more notably the late Professor The Right Honourable Owen Arthur, where he said the matter had to be taken to the people and in January 2005 at which time he said the move would have been made by “year end”.

“This BLP will move this country to a higher and mature plane of political development by having changes to our Constitution that embrace many of the proposals of the Henry Forde Constitutional Commission. Some of these proposals address fundamentally our standing as a nation before the family of nations as a country that is secure in its own identity, to have one of its own become its supreme head of state,” Arthur reportedly stated. On 2 December 2007, reports emerged that this vote was put off due to concerns raised by the Electoral and Boundaries Commission

Former Prime Minister Freundel Stuart also announced his intention back in March 2015 to move the country towards a republic form of government “in the very near future”.

During her over two-hour long speech the governor general also revealed that the engagement of her role will be increased. “For almost 50 years, the ceremonial, administrative and social functions of the Governor General have remained largely the same. It is now proposed to add to them, the following list of activities: The Governor General’s Charity and Trust, which will be overseen by a Board and support worthy national causes, the establishment Of Fine Minds For Barbados, a Think Tank of Barbadian academics and skilled nationals in the diaspora to ensure we use the talents of all Barbadians in support of national challenges; the Governor General’s Annual Lecture; and Purpose Filled Youth, a training and motivational initiative for Barbadian youth, which will be conducted at ages 11 and 16.”

It was explained that this programme will be continued until such time as there is further discussion on the transition to republic status. (JH)