Historian, Dr. Rodney Worrell, shared some historical facts with the crowd in attendance. 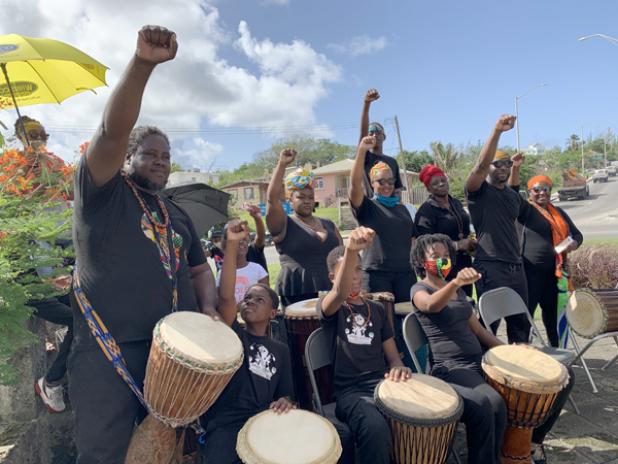 Members of the Israel Lovell Foundation.

More still to be done

While the strides made by freedom fighters over the years were highlighted during the event, the general consensus was that there is still a long way to go.

History lecturer at the University of the West Indies, Dr. Rodney Worrell, also held this view, particularly as it relates to removing the images and symbols associated with slavery.

“So we still have some way to go. I am saying that as part of our own entire reparations. Because we can’t be asking for reparations from those from Britain, but we also have a duty to be doing something. As a history teacher, I am saddened by the fact that very few of our students are taught history; it boggles the mind. As a revolutionary, you see the contradictions; when you see the contractions, you recognise that the struggle is long and hard. The struggle must continue one step forward, no steps backward. Forward ever, backward never.”

Lawyer Robert “Bobby” Clarke agreed with Dr. Worrell, saying that he was able to have a road changed to Mandela Drive over two decades ago and suggested that all the roads on Bank Hall, which carry colonial names, should be renamed.

The event was attended by Cabinet Ministers and members of the diplomatic corps and featured the rhythmic beats of the Israel Lovell Foundation. A group of cyclists, the “Emancipation riders”, paid their customary tribute with three laps around the Bussa statue before heading to the historic Bayley’s Plantation in St. Philip. There was also a flower-laying ceremony at the base of the statue, in memory of the National hero and other freedom fighters.

The event ended with the planting of a Baobab tree in an open area on the opposite side of the roundabout perpendicular to the statue. (JH)